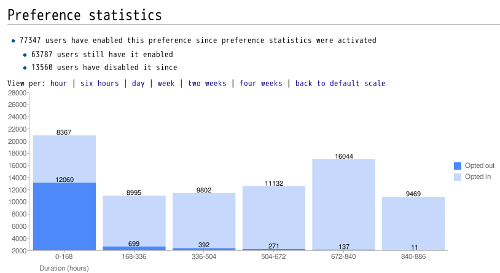 Here’s a brief update on the status of our recently launched usability improvements.
Since the launch of the beta invitation to the first set of usability improvements on August 6th, about 173,000 people tried out the beta and about 134,000 people continue to use the beta as of September 12th.
Beta retention rate is interpreted roughly 77%. These numbers are aggregation of all Wikimedia projects in all available languages. If we look at the retention rate by project or by language, the number varies significantly. For example, the beta retention rate of English Wikipedia is 82% and Spanish Wikipedia is 80%, while the beta struggles to retain beta trial users of the language communities such as Japanese and Korean at the retention rate of 59% and 54% respectively.
We are reviewing the survey feedback and trying to isolate specific issues of languages whose retention rate is below average. If you are curious about how the beta opt-in and opt-out look like at daily or weekly basis, you can visit the preference statistics page. Here is the example link to English Wikipedia. Just change the language prefix or project name to get to the project of your preference.
Naoko Komura, Program Manager, Wikipedia Usability Initiative