Video of the monthly Wikimedia Foundation metrics and activities meeting covering the month of September (October 4, 2012)

79,572 (-0.74% compared with July / -0.81% compared with the previous year)
(Database data, all Wikimedia Foundation projects. Note: We recently refined this metric to take into account Wikimedia Commons and activity across several projects.)

(Financial information is only available for August 2012 at the time of this report.) 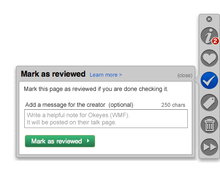 The Curation Toolbar, here being used to mark a new article as reviewed and send its author a message

Every day, thousands of new pages are created on Wikipedia, requiring hundreds of volunteer editors to check them for quality. To make their work easier, the Editor Engagement Team has developed the “Page Curation” feature. It includes two tools:

Page Curation was deployed on the English Wikipedia on September 20, and is planned to become available on other projects as well.

Many new Wikipedia editors experience frustration when they start an article that does not meet community expectations and gets deleted. It is hoped that the Page Curation feature will also lead to better feedback for page creators.

Over the last half year, a new model has been established for distributing the donation money raised via Wikimedia project sites. More than $10 million of it will now be allocated based on the recommendations of the new Funds Dissemination Committee (FDC), which consists entirely of volunteers.

The FDC is now reviewing funding requests by 12 organizations, which are open for public comment until October 22.

A detailed report of the Engineering Department’s activities for September 2012 can be found at:

In September, the VisualEditor team continued its focus on re-engineering the code of VisualEditor so that it is more modular and easier to extend. This involves creating and documenting a number of formal APIs at each point in the architecture, that means a developer does not have to understand the entire code base to be able to add new features. The early version of the VisualEditor on mediawiki.org was updated twice, fixing a number of bugs and building out better support for language and key concepts like categories, language links and other “magic words“.

Critical to the VisualEditor is Parsoid, a parsing program that translates plain wikitext into annotated HTML for easy editing, and vice-versa. The Parsoid team spent September improving their prototype in JavaScript to get it ready for a release in December, and improving the (faster) C++ version of Parsoid for longer-term deployment. The original plan to finish the C++ version before the December release looks very risky with the limited resources available, so the current plan is to release the JavaScript prototype instead.

On the JavaScript side, the focus was on round-tripping of templates, i.e. the process of appropriately converting templates from wikitext to annotated HTML, and back to wikitext (thus completing a “round-trip”). They also worked on the Cite extension, support for category links and “magic words”. Many parser tests (which allow to measure the parser’s ability to correctly translate wikitext) were added, and a new milestone of 603 passing round-trip tests (with 218 to go) was reached. First steps towards round-trip testing on a full copy of a wiki’s content were taken.

In the C++ version, the tokenizer (the program that demarcates strings of characters input in wikitext) can now support very simple content, and use it to populate the internal data structures. Basic interfaces for asynchronous and parallel processing were defined to improve performance and thus increase responsiveness for users.

This month, the Features team deployed more new features for Article Feedback, a quality assessment tool currently being tested on 10% of articles on the English Wikipedia. Improvements include iPad support, special abuse filters to automatically disallow swear words and common vandalism, as well as automated filtering to reduce the workload for editors and administrators. The team is now in the process of re-factoring the code, making it more scalable, prototyping a mobile web interface, as well as collecting more data to track how many readers who post feedback end up becoming editors as a result. A full release to 100% of English Wikipedia is expected in coming weeks, with other wiki projects starting later this year.

The team also deployed the first version of Page Curation on the English Wikipedia, a feature that aims to help Wikipedia patrollers review new pages faster and easier, as well as provide better feedback to page creators (see also general “Highlights” section). It includes two tools: the New Pages Feed (a dynamic list of new pages for review by community patrollers) and the Curation Toolbar (an optional panel on article pages). The Curation Toolbar provides a variety of tools that let users get page info, mark a page as reviewed, tag it, mark it for deletion, send WikiLove to page creators, or jump to the next page on the list.

The first project of the Micro Design Improvements team, which consisted in simplifying the “edit” window, has now been deployed on the English-language Wikipedia. The current priority is to fully productize these changes and fix associated bugs before moving forward.

Last, the Editor engagement experiments team (E3) announced the results of the first iteration of the post-edit feedback experiment, and worked on productization of the most successful confirmation message in a new MediaWiki extension, as well as through collaboration with the VisualEditor team. In addition, the team deployed the second iteration of experimental post-edit feedback, which lets new editors know when they reach important editing milestones early in their participation on Wikipedia. E3 also continued readying work on account creation user experience, and the new analytics infrastructure to support feature experimentation.

The mobile team continued to work on new feature for the mobile view, like a new navigation menu, currently a beta feature. Preliminary support for sharper images on high-density displays (such as the iPhone 4/4S/5 and many Android phones) is being worked on; this will apply also to the desktop view on suitable tablets (iPad 3, Nexus 7, Kindle HD) and laptops (Retina MacBook Pro, Windows laptops with desktop zoom at 150% or 200%).

A new version of the Wiki Loves Monuments App was released, that allows users to use it in combination with a separate camera. Over 3,000 pictures have now been uploaded from mobile devices. In collaboration with the Product team, the Mobile team will next analyze data from the competition, to better understand how to proceed with a dedicated Commons upload tool. The team has received positive feedback about the app, which has been a big hit with new Commons users from early data analysis.

Regarding mobile access in less-developed countries, the Wikipedia Zero program (an initiative to enable free mobile access to Wikipedia) continued to expand, with several additional mobile carriers now in the testing phase (see also below). The mobile team is also putting the final touches to the Wikipedia S40 J2ME app, a mobile application for the Java Platform, still used by many phones in the Global South. Users without a smartphone and a data plan won’t be left out: access to Wikipedia over SMS or USSD (e.g. WAP) is being worked in collaboration with the Praekelt Foundation. This tool uses the open-source software vumi.

Last, a new EPUB export feature was enabled on the English Wikipedia. It can be used to collate a personal collection of Wikipedia articles and generate free e-books that can be read on a broad range of devices, like mobile phones, tablets and e-ink-based e-book readers.

Prepared for a fundraising test on Italian Wikipedia in October
Continued weekly fundraising tests in English.
Added Adyen as a payment processor.
Continued to research donation rejection rates/reasons for the countries we are testing.
Canada donor groups
Began hiring and training a core team of customer service agents to ensure we have a 99% response rate during the annual fundraiser. This will also allow us to get important data necessary to improve our donor experience.
Storytelling interviews conducted at Wikimania 2012 are currently being edited with the goal of creating a short educational video about Wikipedia. Soon, we plan to conduct a test incorporating video into fundraising appeals.

4 WMF Grants were awarded during September 2012:

10 grant reports were accepted by WMF during September 2012:

Ongoing Debates on the Portuguese Wikipedia

Students can learn the basics of English Wikipedia policies and editing tips through a new on-wiki tutorial. The four training modules cover an introduction, Wikipedia’s core principles, basics of editing, and advanced editing. In total, it should take about one hour to complete. Learn more about the training

Courses kick off in U.S., Canada

More than 60 courses are participating in the U.S. and Canada Wikipedia Education Program this term, and many students are starting to make their first edits now. For example, Dr. Chad Tew’s mass communications course is creating articles about journalists who have been killed, and the students have already selected topics and are starting to do research. See their work by checking out the course page

Research data released this month shows that Spring 2012 students in the U.S. and Canada programs improved the quality of articles by an average of 6.5 points on a 26-point assessment scale, with 87.9 percent of articles showing noticeable improvement after student edits. That’s a 0.7 point improvement over student work from the Public Policy Initiative pilot. The new research is part of our ongoing efforts to determine success factors for future classes in the U.S. and Canada Education Programs. See the results

Professor argues for Wikipedia’s use in class

Wikipedia belongs in university classrooms, argued Michigan State University professor Jonathan Obar in a piece posted on ReadWriteWeb. The highly informative article walks people through why Wikipedia is a valuable tool for both teaching and research, and explains the benefits for each in terms of student learning. Read the article

The Wikimedia Foundation blog featured a post highlighting the work of two students from the Cairo Pilot, Helana Fola and Mina Saber. Helana and Mina are both French literature students at Ain Shams University, and they discovered a skill for French to Arabic translation through their work with the Cairo Pilot. Learn more about their experiences with the program

Professor from Brazil profiled on blog 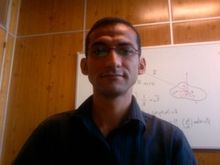 Edivaldo Moura Santos, a professor of physics at the Universidade Federal do Rio de Janeiro, started using Wikipedia in his classroom in spring 2012 as part of the Wikipedia Education Program. His students improved articles on electromagnetism, and he was thrilled with the unique experience it afforded them, especially in regard to student learning and engagement. His work was featured in a blog post on the Wikimedia Foundation blog. Read the post

HR supported two major events for the WMF staff. The first was a Strategy Retreat where Sue, the C-level team, and Directors with programmatic WMF responsibilities came together to discuss 2012-2013 initiatives, focus, and prioritization. Sue will be taking the output of this meeting to the board during their October board retreat.

The second was the AllHands, where all WMF staff come together to discuss current priorities and culturally relevant organizational issues, such as improving our practices for interacting with staff all over the world.