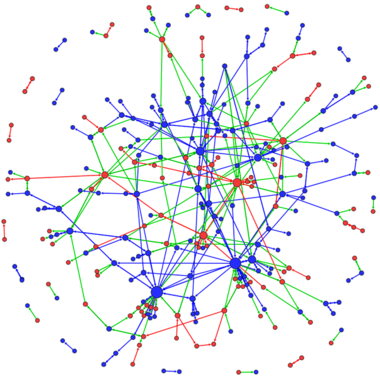 Neutral Point of View – the requirement that articles must represent all significant viewpoints fairly – is one of the three core principles that Wikipedia is based on. Many of its readers value it, especially when seeking unbiased information in times of heated political battles.

In the run-up to the US presidential election, a group of six researchers from the University of Southern California and the Barcelona Media Foundation have published the results of a new study[1] showing that “despite the increasing political division of the U.S., there are still areas in which political dialogue is possible and happens” – namely, the talk pages of Wikipedia, where users of both political persuasions debate and collaborate to create encyclopedic coverage of political topics.

The research project–presented earlier this year at the 32nd INSNA (International Network for Social Network Analysis) Sunbelt conference and now documented in preprint form–conducted a quantitative analysis of the interactions of Wikipedia users who had proclaimed a political affiliation on their user page, in terms of the US political system. As the researchers write in the abstract:

“In contrast to previous analyses of other social media, we did not find strong trends indicating a preference to interact with members of the same political party within the Wikipedia community. … It seems that the shared identity of ‘being Wikipedian’ may be strong enough to triumph over other potentially divisive facets of personal identity, such as political affiliation.”

The paper’s title, “Jointly they edit,” was chosen in reference to the well-known phrase “divided we blog” coined in a 2005 paper that referred “to a trend of cyberbalkanization in the political blogosphere, with liberal and conservative blogs tending to link to other blogs with a similar political slant, and not to one another.” A similar divisive trend was found in the retweet networks on Twitter.

As a testament to what can be achieved in a fruitful collaboration between many editors including opposing political persuasions, Wikipedians have brought the articles about both contenders in tomorrow’s presidential election to “featured article” status, representing the highest quality rating on Wikipedia. The article Barack Obama has received more than 22,000 edits since it was started in March 2004, and its information is currently supported by 319 inline references. The article Mitt Romney, begun in January 2004, has been edited over 10,000 times and currently contains 400 inline references.

So no matter who gets the most electoral votes tomorrow, you can trust that many Wikipedians have worked together to ensure that his Wikipedia page will reflect a balanced political perspective.

For more coverage of recent academic research on Wikipedia, read our monthly Wikimedia Research Newsletter or follow its updates on Twitter and Identi.ca.