The fantastic lobster statue Gamba de Mariscal can be viewed in Barcelona, Spain. The image was also highlighted on Barcelona’s website for a few weeks!

Sometimes it’s hard to know what is art and what is not. Then the structured lists that we have prepared will surely help! The Parkbank (Eng: Park bench) can be found in the Museumspark in Linz, Austria.

Artwork comes in all sizes. Some artwork, such as Ohel (Eng: The Tent) in Ramat-Gan, is really large… 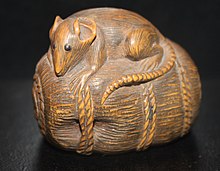 …While other artwork, such as a Japanese netsuke, is very small. This one can be found in the collections of the Museum of Far Eastern Antiquities in Stockholm, Sweden.

Finland has many works of art, but only a few can be photographed, as Finland sadly lacks Freedom of Panorama for artwork. The beautiful Keisarinnankiviä in Helsinki is however one of the pieces that can be photographed because of its age!

This May, organizers in several countries have inaugurated an international photo event called Wiki Loves Public Art, a short contest that focuses on the great public works of art around us. The contest has been organized in Austria, Finland, Israel, Spain (Barcelona) and Sweden by the Wikimedia movement in cooperation with Europeana, and with great support from many local organizations, institutions and our fantastic volunteers.
Art plays a central role in all societies and cultures and is an integral part of what makes us human. To better understand art is to better understand ourselves; through this contest the Wikimedia movement has invited everyone to take pictures of the public works of art that are part of our lives!
Some people have wondered why we initiated a new contest instead of simply making works of art a part of the great Wiki Loves Monuments (WLM) contest. It is indeed a relevant question, and something we thought long and hard about. However, we believe that through this contest we can reach a new group of volunteers, consisting of art lovers and photographers, and also associated organizations and GLAMs. Making these new and more focused contacts would be harder had we simply added even more objects to an already giant contest.
We also believe that there is room for more than one Wikimedia photo contest per year and we tried to put a reasonable amount of time between the two (taking many factors into consideration, such as: holidays, the weather and the time between the end and start of the WLM contest, so that volunteers and staff can recover a bit). More importantly we have also tried to make it as easy as possible for volunteers to participate by following the structure and technical framework used during WLM. This also enabled us to reuse many of the tools developed for WLM.
Wiki Loves Public Art uses the same approach as WLM, with each of the national contests being separate, but able to submit ten of their best pictures for the international contest. These pictures are then judged by the international jury, which will award prizes to the best of the best. The winner of the international contest will win a traveler’s cheque worth 500 euros, with the runner-up receiving 300 euros and the second runner-up 200 euros. Europeana will also award the winners with a high-quality print of their beautiful image.
Due to a lack of national databases of artwork in most countries (Israel being the exception), the organizing teams have had to work hard on retrieving data to build these lists. As a result, this first year the focus has been on organizing the contest in a few pilot cities in each country. The response so far has been fantastic, with many lists flooded by new pictures, especially the lists for Barcelona and Vienna!
Encouraged by this, we hope to expand to more locations next year. Perhaps your city or country has some great artwork that could be photographed? Either outdoors, or if you lack Freedom of Panorama in your country, perhaps public domain art in museums?
In Sweden, Wikimedia Sverige, with financial backing from Vinnova, has pioneered the development of an open database of public art for the entire country, and with a public API. This database, and the experiences gained from this project, could be used by other Wikimedia chapters and organizations wishing to gather data about public artwork from cities and municipalities in their countries.
This year, however, the focus in Sweden is on artwork in museums, and this has helped us establish new collaborations with nine art museums. By the end of the contest we will have had five special events at these museums, where our volunteers also get free entrance.
Currently, at the halfway point of the contest, we have had approximately 5,000 uploads of 1,400 different works of art. With 10 more days to go, we are very excited about the outcome of the contest in its first year. We hope to be able to arrange Wiki Loves Public Art again in coming years, of course with even more countries participating! So do contact your local city or municipality and ask if they have a database and would like the world to experience their works of art online.
John Andersson
International coordinator for Wiki Loves Public Art
Wikimedia Sverige