For three years, more than 200 students at the Aristotle University of Thessaloniki have analyzed or enriched Wikipedia. Both the students and Wikipedia gain a lot from this relationship.
The first contact of the university’s educational program with Wikipedia was through the postgraduate program in Web Science, through which the Greek version of DBpedia was developed and was further enriched and improved. After presentations to postgraduate students on the workings of templates in MediaWiki, they were able to create new infoboxes, improve old ones, and create the ontology for entering information from Wikipedia to DBpedia. The same was done for another two years. In parallel, the students also created some important articles on mathematics.
At the campus of the Aristotle University of Thessaloniki, a few metres away from the School of Mathematics, there is the Medical School. In the undergraduate course in Medical Education for two years, students were given the assignment to translate articles from English to Greek Wikipedia. Targeting the quality rather than the quantity of translated articles, students formed groups of two or three to work on the same article. This provided the advantage of having multiple editors, which helped in problem solving and copywriting by the students themselves. From a list of suggested topics, many have chosen to translate featured articles from the English Wikipedia, and in several cases the translation is in no way inferior to the original entry. It seems that they have not been recognized as featured articles in Greek Wikipedia simply because no one thought to suggest them! 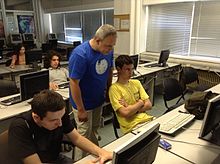 Editing workshop at the School of Mathematics.

Following the previous experience, the same working model was also applied this year to the undergraduate section of the School of Mathematics. But this time it was ehnanced not only with the possibility of editing each article by many students, but in addition to on-campus training on Wikipedia, we have Online Ambassadors whose purpose is to guide and advise students and help them with whatever problem they have. For the suggested topics for translation, priority was given to articles assessed as being of higher quality classes and Top to Mid importance. It seems that this will be yet another a successful project that will enrich Greek Wikipedia with a number of valuable articles.
The translation of Wikipedia articles is something that aids the students by putting them in contact with the terminology of their science, for example with medical terminology which is particularly difficult. Especially in this area, the general consensus is that no one can easily translate texts with medical terms without having a direct affiliation with medical science, at minimum be a medical student. So this case has benefit for both sides: students learned the medical terminology better in both languages ​​and Wikipedia gained quite nice articles that otherwise would have been difficult to create. Also, in both medicine and mathematics, students had the opportunity to work on popular texts aimed at the general public rather than at some academics such as their professor, and therefore use a different way of writing.
These programs were made possible through cooperation with OKFN-Greece and the professors at AUTH that showed interest in the program. Certainly there have been other efforts at other universities in Greece, but with less impact, at least for the Greek Wikipedia. These programs are important milestones for future expansion and operation of similar programs at other universities in Greece. Besides that, with every step we move towards something even better, following the guidelines of the Wikipedia Education Program. Already one of the professors has expressed interest in the inclusion of a comprehensive program of more weeks for the next year. We may see something good!
Konstantinos Stampoulis – User:Geraki