The Wikipedia Education Program began in the Arab World with a small pilot at two universities in Egypt in spring 2012 — and in one and a half years, the program has turned into a force on the Arabic Wikipedia, with students participating in the program in three countries adding content to Wikipedia as part of their university coursework. Many students translate featured and good articles from other language Wikipedias, but some students do original research and writing for the Arabic Wikipedia as well.

It would require this much paper to print out all of the Wikipedia Education Program Arab World students’ contributions to the Arabic Wikipedia over the last three terms. 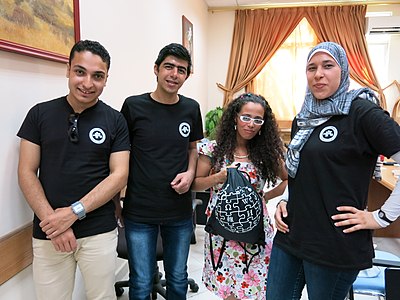 Students at three universities in Egypt participated in the program: Ain Shams University, Cairo University, and Damanhour University. One high school class in Cairo also joined the program. Small pilots at high schools and Isra University in Jordan, and Dr. Yahia Fares de Medea University in Algeria added knowledge to the Arabic Wikipedia this term as well, and additional courses will be joining the program next term from King Saud University in Saudi Arabia. All told, 327 students participated in the program in the spring 2013 term in the Arab World.
Efforts in Egypt are driven by the hard work of professors and faculty leaders. Faculty leaders are volunteer Wikipedia editors who help recruit professors, find Wikipedia Ambassadors to help students, and coordinate activities within each faculty at the university. Faris El-Gwely, Walaa Abd El-Moneim, Doaa Saif El-Din, Helana Raafat, Mina Saber, and Samir El-Sharabaty’s hard work paid off this term, and we look forward to seeing the content available on the Arabic Wikipedia grow thanks to students in the Wikipedia Education Program Arab World.
LiAnna Davis
Wikipedia Education Program Communications Manager