My participation in Wikimania 2013 has shown me many new ideas and latest technological improvements that I was not aware of before. Therefore, I knew that, after Wikimania 2013, I will need to reconsider many of my ongoing projects and strategies, in order to benefit from that new development. I had probably not heard about that development earlier, because my focus is rather narrow (translation, research, user groups, programming) and there are hardly any other people to share in person in my own country. Therefore, I encourage you to provide scholarships to people with specialized Wikimedia-related interestests also in the future, because Wikimania might be the only place where they can meet similarly-tuned people.

Wikimania, the annual global conference of the Wikimedia movement, brought together around a thousand Wikimedians in Hong Kong this August. This year, the movement at large gave out scholarships to individuals from over 65 countries to attend, with the goals of enriching the conference through diversity, and inspiring the Wikimedians in their work. This post reports some statistics about the scholarship process, including results from a survey that was sent to all who successfully applied for a scholarship from the Wikimedia Foundation.

Under the guidance of the Scholarship Review committee, consisting of nine experienced community members (see below), the Wikimedia Foundation (WMF), with financial contributions from Wikimedia Deutschland, made offers to attend to 103 individuals, ultimately sending 85 individuals from 54 countries. Though final numbers are still in the works, the total spent by WMF (including a ~$17K contribution from WMDE) was ~$141,000. 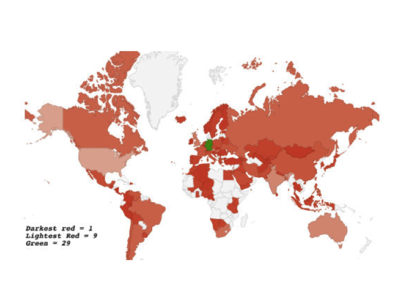 The Wikimedia Foundation offered two types of scholarships in 2013: 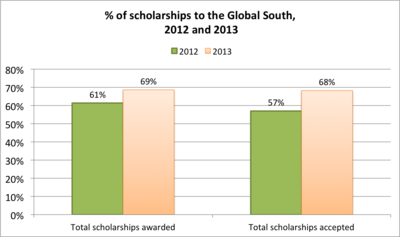 Percentage of individuals from the Gobal South among those awarded with a WMF Wikimania Scholarship (left), and among those who accepted the offer (right). Includes Partial and Full scholars.

The Wikimania Review Committee worked hard to ensure a good mix of scholarship attendees. This year, about 68% of the total scholarship positions were given to individuals in the Global South: a big increase from only 57% in 2012. Many chapters throughout Europe sponsored individuals from their own geographies and language projects to attend. 2013 saw a wider spread in chapter sponsorship of individuals from outside of their geographies, resulting in higher acceptance rates of scholars from outside the European region than in 2012.

Compared to 2012, 2013 saw a higher attendance rate of Partial Scholars at Wikimania: 69% vs 51%. One anticipated reason for the slightly larger acceptance rate is the increase in the amount of money given to partial scholarship recipients. In 2012, the awarded amount was 300 Euros (~US$394). After feedback in 2012 that this was not a sufficient subsidy to travel costs, we increased the award in 2013 to cover ~50% of estimated travel cost by region. That said, ultimately fewer partial scholars actually attended Wikimania 2013, given we could not afford to send as many on the new award amount.

From the survey sent to WMF Scholarship recipients, we also learned that ~75% of scholars were members of a local chapter or local user group. It would perhaps be valuable to assess whether or not sufficient outreach promoting the scholarships program occurred directly on the Wikimedia projects themselves, rather than through meta-level avenues.

These events are what keep the community alive, help us to establish relationships that build a family

In this survey, over 90% of WMF scholarship recipients said that following Wikimania they were somewhat or greatly motivated to increase participation in the online projects, within their local communities, and in future Wikimanias. Hopefully, the scholars do channel the energy from Wikimania into these future projects! Moreover, 93% of respondents indicated they were satisfied or very satisfied with the scholarship process.

For next year, the committee and WMF should think about a few augmentations to ensure a strong group of candidates has the best experience possible:

For more lessons and other statistics, please see the Wikimania 2013 Scholarships page.

The scholarship committee rated over 1200 applications to select the 2013 Wikimania Scholars. The rigorous process included rating across variety of selection criteria:

Committee members are split across seven world regions, in order to ensure consistency in scoring within a given region. The ratings are anonymously averaged to come up with the top candidates by region. See the 2013 Scholarships page for more information on the 2013 process.

Huge thanks goes out to the Scholarship Review Committee of 2013!