Video of the monthly Wikimedia Foundation metrics and activities meeting covering the month of September (October 3, 2013)

(Financial information is only available through August 2013 at the time of this report.)

All financial information presented is for the Month-To-Date and Year-To-Date August 31, 2013.

Expenses for the month of August is $3.34MM versus plan of $4.26MM, approximately $919K or 25% under plan, primarily due to lower personnel expenses, capital expenses, internet hosting, legal fees, grants, and travel expenses partially offset by higher payment processing fees. 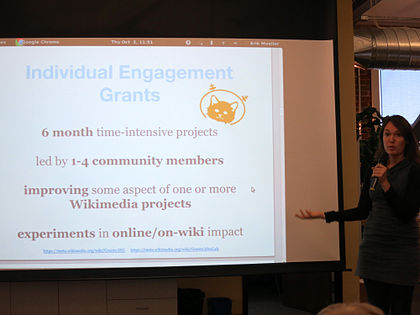 The Foundation’s Individual Engagement Grants support individuals or small teams working on projects that help Wikimedia’s volunteers do their work. The program was started in early 2013 and its second round of proposals closed on September 30. 22 complete proposals were submitted, totaling $297,575 in requested funding. The requested sums range from $10 to $30,000. Via online community organizing, offline outreach, tool-building and research, the proposals aim to impact at least 15 different Wikimedia projects. Examples include a project for “Reimagining Mentorship on Wikipedia” and work on ensuring that gadgets that support editing are updated to be compatible with the new VisualEditor. In October, proposals are being checked for eligibility while community discussion continues, before the committee’s formal review begins on 23 October.

The Funds Dissemination Committee (FDC) process is another component of WMF grantmaking, where organizations in the Wikimedia movement can request larger grants to support their annual plans. This committee, which reviews the requests and makes recommendations to the Board of Trustees consists, entirely of volunteers, supported by WMF staff. The second FDC round of 2013 was concluding in September, with 11 Wikimedia organizations requesting a total of almost 6 million US dollars. Until October 31, Wikimedians are invited to participate in the community review period of the proposals

FDC staff also worked on preparing the 2012-2013 annual report looking back at the first year of operation since the FDC was established in 2012. It includes reflections from WMF Executive Director Sue Gardner about the FDC process.

The Foundation’s Legal and Community Advocacy team announced the launch of the 4.5 month-long community consultation and feedback period (scheduled to conclude on 15 January 2014) for the new privacy policy draft. Feedback and discussion has been very fruitful thus far and have already helped improve the draft. 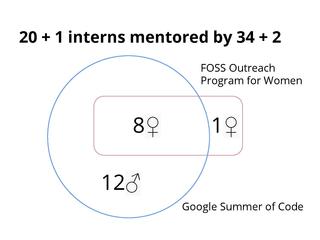 A detailed report of the Tech Department’s activities for September 2013 can be found here.

Major news in September include:

In September, the VisualEditor team continued their work to improve this visual tool to edit wiki pages, and enabled it on more wikis. The focus in the team’s work this month was to continue to improve the stability and performance of the system, fix a number of bugs uncovered by the community, and make some usability improvements.

Improvements were also made to Parsoid, the program that converts wikitext to annotated HTML, and vice-versa. Bugs were fixed, performance statistics were added, and the code base was cleaned up. We planned out an implementation strategy for language variant support, and started researching and experimenting with HTML storage options, which is required for a number of projects in our roadmap.

In September, we released Notifications on more Wikipedias, such as the Dutch, Hebrew, Japanese, Korean, Spanish, Ukrainian and Vietnamese. Notifications allow users to stay informed of changes and discussion that affect them. Community response has been very positive so far, across languages and regions. For each release, we reached out to community members weeks in advance, inviting them to translate and discuss the tool with their peers. As a result, we have now formed productive relationships with volunteer groups in each project, and are very grateful for their generous support.

This month, we continued architecture work on Flow, the new discussion system, to integrate it with watchlists, recent changes, mentions and notifications. We also started experimenting with VisualEditor-enabled posting. We began a sprint to create a new interface for the board and discussions that will work across desktop and mobile platforms. We are aiming to implement this design next month, in preparation for several rounds of new user and experienced user feedback before the first release.

In September, the Growth team (formerly known as Editor Engagement Experiments, or E3) primarily worked on the onboarding new Wikipedians project. In particular, this included the creation and deployment of two new guided tours to teach any new user how to make their first edit, using wikitext or VisualEditor. The guided tours feature was also enabled to the following language editions of Wikipedia: Catalan, Hebrew, Hungarian, Malay, Spanish, Swedish, and Ukrainian. Along with the renaming, the team held its third quarterly review (minutes and slides are available) and published its 2013–2014 product goals. Last, in accordance with the 2013-14 goals, the Growth team began research into modeling newcomer retention on Wikipedia, anonymous editor acquisition, and article creation improvement. 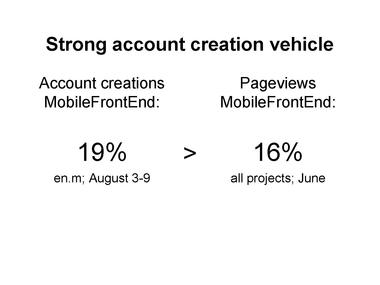 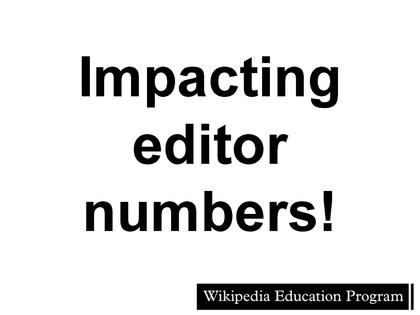 2013 staff photo, taken during the All Hands meeting

The primary September activities for HR included ongoing support of three executive searches (ED, VP of Engineering, Chief Communications Officer), organizing and facilitating a 2-day AllHands where all staff come together to build alignment and teambuild, supporting Engineering’s two tech days, and hosting a Bring Your Kids to Work Day. HR also hosted a leadership roundtable for hiring managers on hiring well for the Wikimedia Foundation, and a course on meditation, as well as another one on stress busting. We also conducted a compensation audit with Finance, launched a search for a new Manager of Recruiting, we have a new recruiting intern, and we’ve done more back-end work on our 401k plan for new fund selections and upgrades for 12/1/2013. 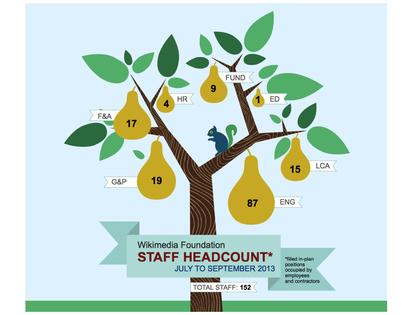 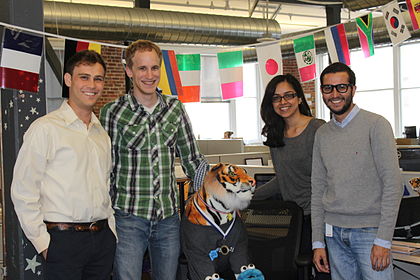 The fall 2013 legal interns, together with Rory, the legal mascot

We are happy to welcome two new legal interns joining us for the fall semester – Dashiell Renaud joins us as a recent graduate from Vanderbilt Law; and Jorge Vargas joins as a practicing trademark attorney from Baker McKenzie’s Bogota, Colombia office and recent graduate from Universidad de Los Andes. We say farewell to one of our summer interns, Lukas Mezger, as he returns to Germany. We wish him all the best!

Special thanks to outgoing Senior Director of Communications, Jay Walsh. After nearly 6 years at the Wikimedia Foundation, Jay Walsh announced that he was transitioning away from the organization in a full-time capacity. He will continue with two projects through the end of the year, but his departure marks a significant change for the Communications team and the Foundation as a whole.

At a send-off event, Executive Director Sue Gardner gave a heartfelt speech about Jay’s impact on the Wikimedia Foundation as it has grown from a budding non-profit with fewer than 10 staff in St. Petersburg, Florida, to the significant organization it is today. According to Sue, when Jay began working in early 2008, the organization wasn’t nearly as robust as it is currently, and every little press and media concern seemed capable of derailing its growth. She complimented Jay for his excellent judgment and his calm in navigating the most challenging media scenarios. She credited him with keeping the organization focused on the importance of its mission, while building capacity for managing an international media ecosystem with the many Wikimedians around the world entrusted with communicating our story to the public.

Over the next few months, the Foundation’s leadership team will conduct an international search for the new Chief Communications Officer. In the meantime, we’d like to express our thanks for all of Jay’s hard work. He will be missed.

There were no Wikimedia Foundation press releases or significant announcements in September.

The Wikimedia Foundation has enabled HTTPS default browsing for nearly all Wikimedia project editors. Notable exceptions include readers from some countries that routinely block HTTPS. WMF Deputy Director Erik Moller shared some thoughts on the rationale for not having HTTPS default for all editors: “If we accommodate [China]’s or Iran’s censorship practices, we are complicit in their attempts to monitor and control their citizenry. If a privileged user’s credentials (e.g. Checkuser) are misused by the government through monitoring of unencrypted traffic, for example, this is an action that would not have been possible without our exemption. This could potentially expose even users not in the affected country to risks.”

Wikipedia editors move the Bradley Manning article to “Chelsea Manning” and change use of pronouns to feminine after she declares she identifies as a woman, which resulted in great praise in the press. After an RfC and heated debate, article is moved back to Bradley Manning, though feminine pronouns remain, which resulted in lots of condemnation in the press. In the debate, many people accuse Wikipedia editors of being insensitive to transgender issues.

Goa University worked with The Center for Internet and Society in India and Wikimedia India to license the Konkani vishwakosh (or encyclopedia) under Creative Commons. The Konkani encyclopedia is planned to be the basis for the Konkani language Wikipedia, which will be developed over the next 6 months. The university also hosted a workshop over several days where roughly 40 people created new articles in Konkani Wikipedia.

Academics from the University of Witwatersrand in South Africa organized an event with journalists from Lead SA to create and edit content on Wikipedia in an attempt to expand and improve the content about South Africa on the online encyclopedia.

For lots of detailed coverage and news summaries, see the community-edited newsletter “Wikipedia Signpost” for September 2013:

Visitors and guests to the WMF office in September 2013: