Armenian students participating in WikiCamps divide their time between editing Wikipedia and physical activities. Here they use their bodies to spell out “Wiki Camp”. Photo by Beko, freely licensed under CC BY-SA 4.0

WikiCamps is a new educational project organized by Wikimedia Armenia to encourage young people aged 14-20 to edit Wikipedia. This program provides a healthy balance of work and fun, insures the safety of participants, and seems particularly effective for engaging teenagers. Making this possible wasn’t easy — and it took time and effort.
So far, four WikiCamps have been held in Armenia. Each one took several months to study and plan — and required quite a bit of work to implement. Two camps were held in the summer of 2014, one took place in the fall and another was held in the winter. The summer WikiCamps were attended by 135 students, who created 5,425 new articles and added more than 22 million bytes of content to the article namespace on the Armenian Wikipedia. The fall and winter WikiCamps had 73 participants, who created more than 997 Wikipedia articles, adding more than 3 million bytes as well as improving 576 articles on Wiktionary.

It is generally easier to organize training events for somewhat older users (e.g.: university students), rather than working with younger participants. Adults are better acquainted with research, which is the cornerstone of Wikipedia — and do not need as much attention to contribute quality content. This is consistent with worldwide editing patterns, which suggest that the majority of Wikipedia editors tend to be adults. However, this is not the case in Armenia, where extensive training sessions for teenagers were held with very promising results. 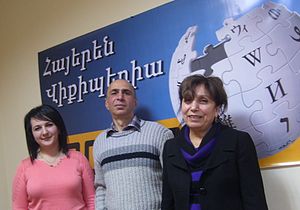 Press conference about WikiCamps in Wikimedia Armenia. Pictured from left to right are Lilit, Mher and Susanna. Photo by Beko, freely licensed under CC BY-SA 3.0

This project started with a budget of US $2,000, which was left over from a Wikimedia Foundation grant to Wikimedia Armenia. Susanna Mkrtchyan, President of the Armenian chapter, suggested using these funds to hold camps for school children aged 14-20, so they could learn to edit Wikipedia in a collaborative and safe atmosphere. “When I mentioned our experience with WikiCamps, everyone was excited,” says Susanna, “But we must be careful when working with children. I’m a grandmother and an educator, so people trust me with their children. Safety was our first priority during the camp. We kept an eye on everyone during the day and we closed the camp at 10 PM.”

Every day the WikiCamp started with warm up exercises and sports. Editing Wikipedia came next, but for only 4 hours a day. The rest of the day was spent practicing favorite hobbies. Mkrtchyan said, “They wanted to contribute more to be the best editors, but we didn’t let them. We wanted them to dance, do sports, play music. We wanted to always keep them active.” On the other hand, a competition for the highest contributor was held every day, to encourage campers to do their best during editing hours. It was extra work for the organizers to check all participants’ contributions daily, but it helped campers focus on editing during assigned hours, so they wouldn’t forget the main purpose of the camp: to actively contribute to Wikimedia projects. 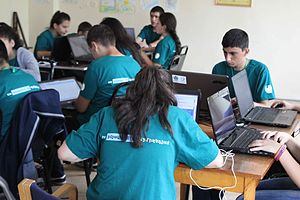 Students edit Wikipedia in one of the summer WikiCamps (which are called Վիքիճամբար in Armenian). Photo by Beko, freely licensed under CC BY-SA 3.0

This well-divided timetable successfully encouraged students to add high-quality content to Wikimedia projects in a short time. It was also helpful to impart a love for Wikipedia and contributing to free knowledge. Mixing editing with fun activities and not letting them exceed the time limit increased the campers’ passion for editing Wikipedia. And every night, the campers also engaged in another competition: composing the best song about Wikipedia. They used known song melodies and wrote new lyrics about being in love with Wikipedia. During each camp, students were also sent on two expeditions to discover new places. “They don’t just contribute to Wikipedia. Their character also changes, which is more important for them,” Susanna notes.

Project leaders helped newbies choose articles to edit, but everyone had the option to select a topic to research — or translate articles from other languages. Younger campers were invited to edit Wiktionary, since it is a simpler assignment — while the older campers edited Wikipedia (many of them had already participated in WMAM’s Education Program). This well-prepared division of work, combined with daily competitions, provided two important motivations for engaging participants. Camp fees were covered for those who made the highest contributions in previous camps (or on Wikimedia projects in general), while newbies paid their own fees. This seems like an effective reward system for participants.

There was not much money to advertise the camps. Instead, Mkrtchyan wrote press releases and invited journalists to press conferences in which Wikimedia Armenia announced each of the WikiCamps. Social networks replaced usual advertising methods, as the project depended mainly on word of mouth, press coverage, and social media, rather than customary high-cost advertising campaigns. Some of these ideas may not be possible elsewhere, but this approach worked well in Armenia.

Wikimedia Armenia’s WikiCamp project was recognized as one of the “coolest Wikimedia Chapter projects” of the year at Wikimania 2014. Our chapter agrees and we are very excited to be sharing this story and experience with our community.

These Armenian WikiCamps exceeded all our expectations. This experience shows that thinking out of the box to empower users can be very productive, with the right amount of preparation. This pilot contributed a large amount of high-quality content, while keeping participants active and engaged as Wikipedia participants.