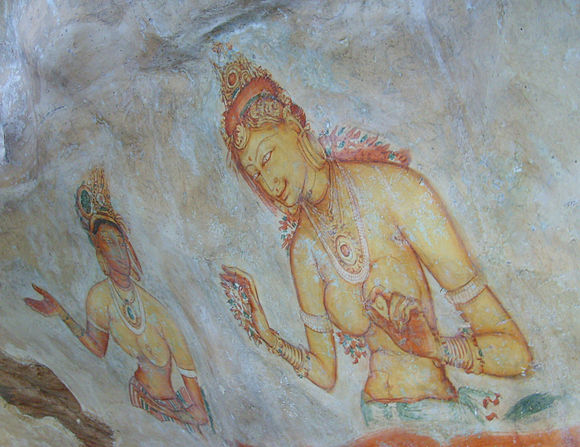 The Anuradhapura Kingdom, a former state in Sri Lanka (c. 377 BCE–1017), left several paintings and frescoes behind. This one, from Sigiriya, is the oldest and best preserved from that period. Photograph by Chamal N, public domain.
History shows that there is a long list of countries that have simply ceased to exist, but there is no one way to go about it. The Russian Empire dissolved in violence in 1917, and its successor state (the Soviet Union) gave way to present-day Russia in the 1990s. The modern-day split of Czechoslovakia was peaceful, while nearby Yugoslavia broke apart during a civil war into several new countries. The Republic of Texas was willfully annexed by the United States. The Republic of Vietnam was taken over by its northern counterpart; similarly, the Songhai Empire was briefly annexed by Morocco, and the Anuradhapura Kingdom of Sri Lanka was overtaken by armies from India.

To cover this diverse set of geographical entities, the English Wikipedia has formed WikiProject Former countries. The project was created in 2004 and currently boasts 42 active editors; aside from the countries listed above, it includes several states that were critically important in world history, including Assyria, Sumer, the Mongol Empire, and Nazi Germany.
44 of the project’s articles have attained “featured” status, as determined by a peer review from editor colleagues. These include the encyclopedia’s coverage of the Byzantine and British Empires, both sprawling and continent-spanning, along with an entire series on the Brazilian monarchy of the nineteenth century—including the first and second emperors, and the latter’s wife, first son, second son. Another 77 articles are rated as “good.”
Last month, the Signpost, the English Wikipedia’s community-written news journal, interviewed two members of the former countries project about their background and goals for the future.
OwenBlacker noted that his grade school experiences with history as a topic were less than stellar, something that put him off for many years “until I discovered my uncle’s copy of The Times Atlas of World History and realised that learning more about history meant there were even more maps to look at—always a guilty pleasure. That helped me realise it wasn’t history I disliked, just the parts I [had been taught]. Since then I have read (and looked at maps) of history in great quantity.”
OwenBlacker and his fellow project member, MirkoS18, differed greatly in their choices of favorite topics. Owen chose pre-Napoleonic Europe, a topic in which wrote the good article Principality of Stavelot-Malmedy—a small, strangely shaped voting Imperial abbey of the Holy Roman Empire. Mirko—who hails from Croatia—focused on Yugoslavia. He noted that this was a very different choice from much of the project, as it occurred only recently, and he believes that “there is almost no one who would be emotionally distant and neutral. … [their objectives] are glorification or vilification.”
The project’s largest need is in article writing. Owen noted that their coverage of the Global South was sorely lacking and showed on articles like the Songhai Empire, “one of the largest empires in Islamic and African history,” but currently has a low article quality rating.
Ed Erhart, Editorial intern
Wikimedia Foundation