The photograph is simply labeled “Willy.” It features a young man with close-cropped hair and dressed in fine clothing, including a collared shirt and jacket. Willy is looking at something amusing off to his right, and the photograph captured just the hint of a smile from him—the first ever recorded, according to experts at the National Library of Wales.
Willy’s portrait was taken in 1853, when he was 18. He was captured on film because he was born into the Dillwyn family from Swansea in Wales, whose photography hobby was inspired by relative-by-marriage Henry Fox Talbot, who invented salt print and the Calotype. Two members of the family were particularly notable: Willy’s father, John Dillwyn Llewelyn, was a botanist who took the earliest-ever photographs of Wales.
This particular photograph, however, was taken by John’s sister Mary, who is important in her own right for being one of the first female Welsh photographers. She was among the first to avoid the formal photography used during that time, favoring smaller cameras with short exposure times that could capture informal moments. With this method, she took photos of Willy smiling, the first-ever pictured snowman, and the famous “peeping” girl—perhaps the world’s first photobomb (see photo, bottom of this page).
This image is just one of 4,500 that the National Library of Wales has released onto the Wikimedia Commons, free for anyone in the world to use. The library’s Jason Evans asserts that these images “are hugely significant to the history of Wales and photography in general. Not only do they highlight Wales’ mid-19th century status as one of the most innovative, industrialized, and technologically advanced countries in the world, but they provide a rare snapshot of life at that time.”
Willy’s smiling image, part of a collection from Mary Dillwyn, “are particularly valuable as such images are so rare from that time. … images like the ‘smile’ and the ‘snowman’ are the first of their kind and that means they will always inspire and capture the imagination,” says Evans. He doesn’t seem to be far off the mark: their images have already been viewed more than six million times. 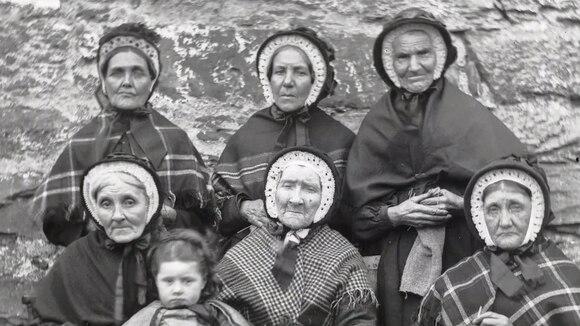 Six months into the Wikimedian-in-Residence, plenty more than smiles and snowmen have been uploaded. Video by the National Library of Wales, freely licensed under CC-BY-SA 3.0.

Evans’ six-month tenure as the library’s Wikimedian-in-Residence, specialized positions that place Wikimedia editors in culture heritage institutions, has been aided by its commitment to open access—the first priority in their 2014–17 strategy document, titled Knowledge for All (pdf), is “access,” including a goal to “further enhance the interfaces that make it possible for users to access and benefit from these materials.” Releasing content on Wikipedia and Wikimedia Commons segues nicely with this plan.
These images have been selected by Evans with an eye towards displaying aspects of the library’s collections and illustrating Wikipedia articles. This has resulted in, as Evans told me, “images that span more than a thousand years of history. These range from “family snaps to formal portraits and photo journalism … early illuminated manuscripts, including a sequence of miniatures portraying the battles of Alexander the Great … [and] maps, paintings and early Welsh newspapers.” These will be joined by extracted illustrations from digitized Welsh newspapers, for which a specialized automated tool is being developed.
Once this content is properly categorized, described, and added to articles, it becomes an “educational tool,” Evans says, for teaching about Wales and photography. He’s personally used it to bring in people for training sessions and edit-a-thons at the library, resulting in new or improved articles on topics like Y Wladfa, the Welsh colony in Patagonia (the far southern region of South America).
Look for more of the National Library of Wales’ content—which includes six million books, periodicals and newspapers, 25,000 manuscripts, and nearly one million visual pieces; Evans calls it “one of the great libraries of the world”—on Wikimedia sites over the next six months. Evans is open to collaborating with other institutions and editors; get in touch with him on Wikipedia.
Evans’ position is jointly coordinated between the National Library and Wikimedia UK, an independent organization that supports the Wikimedia movement in the United Kingdom.
Ed Erhart
Editorial Associate
Wikimedia Foundation

What was perhaps the world’s first-ever photobomb was captured on film by photographer Mary Dillwyn. Photo from the National Library of Wales, public domain/CC0.