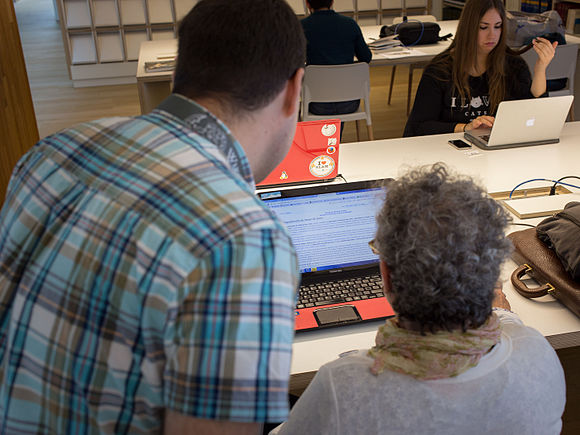 Triedit-a-thon at National Archaeological Museum. Photo by Barcex, freely licensed under CC BY-SA 3.0.
Wikimedia Spain is working at three state museums in Madrid—the Museum of Romanticism, the Museo del Traje (Costume Museum) and the National Archaeological Museum—through its first Wikipedian in residence, Ruben Ojeda. Wikipedians in residence work within cultural institutions to enable them to initiate a productive relationship with Wikipedia and its community, both during the residency and after. The model was launched as part of the Wikimedia GLAM projects (Galleries, Libraries, Archives and Museums) which seek to encourage institutions and their professionals to contribute to the Wikimedia projects.
In this case, besides promoting the Wikimedia projects in these three institutions, various activities open to the public are being carried out with success. We have hosted two concerts of classical music, where learned quite a bit. For example, it is not beneficial to have an audience present—the recordings are degraded when there is outside noise from people’s cellphones or even just coughing. These problems unfortunately doomed the first recording. However, the seven recordings from the second concert with no audience were captured and donated under a free license to Wikimedia Commons, where it can be used on any of the Wikimedia projects. Furthermore, after the concert, an additional 20 recordings were donated by one of the musicians of Wasei Duo. We will host a third concert on November 24.
Wikimedia Spain has also held fourteen Wikipedia training sessions and one edit-a-thon that explain how Wikipedia works and generate content related to the museums and their collections, which focus on the nineteenth century in Spain, fashion and archaeology.
The Museum of Romanticism has cataloged more than 16,000 museum pieces and offers collections of paintings, miniatures, furniture, decorative arts, prints, drawings and photographs collections, which offer a broad panorama of arts during the Romantic era in Spain. The Museo del Traje has cataloged fashion, costumes and ethnography, with a collection of over 170,000 pieces and documents; these collections date from the Middle Ages to the contemporary fashion of Spain. The National Archaeological Museum is, since 1867, the leading Spanish institution in the preservation of historical pieces. Its permanent collection includes over 15,000 items from Prehistory, Early history, Roman Spain, Greece, Egypt and the Near East, Middle Ages and Modern Age.
The development of this initiative has been possible thanks to a grant from the Wikimedia Foundation, without which it would have been impossible to carry out because of the reduction of financial resources that have negatively affecting cultural institutions in Spain. It began on September 7, 2015 and will run until January 7, 2016. Similarly, following the contact with these three museums, Wikimedia Spain signed a memorandum of understanding with the General Department of National Museums, Ministry of Education, and Culture and Sports, which will allow similar initiatives related to the Wikimedia projects to develop in Spanish museums.
Rubén Ojeda
Wikimedia Spain