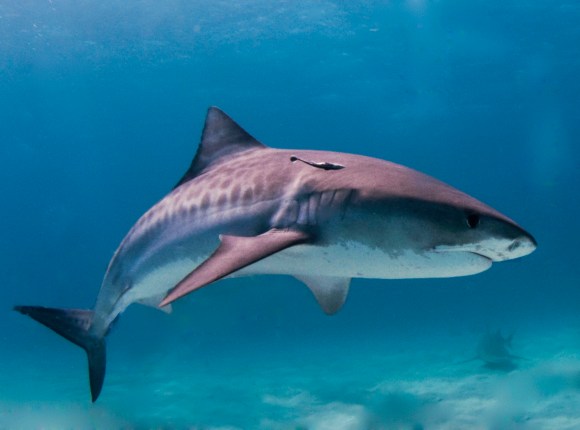 The tiger shark was the Urdu Wikipedia’s 100,000th article. Photo by Albert kok, freely licensed under CC BY-SA 3.0.
On December 29, 2015, the Urdu Wikipedia community achieved a major milestone: 100,000 articles. The article in question, tiger shark (en), was created by Ameen Akbar, an administrator who has made almost 17,000 edits to the project.
The Urdu Wikipedia has come a long way since its inception in 2004. It has a very large number of contributors from Pakistan, where Urdu is the national language, followed by India (where Urdu is among the official languages). There are also contributors from the United States, Finland and Germany.
Urdu Wikipedia bureaucrat Mohammad Shuaib says that, with this feat, the project now joins the bigger league of Wikimedia communities with a much wider presence of free knowledge, and that it is imperative to make it a high-quality, referenced tool, useful to people from all walks of life, including students and teachers.
Mohammad specifically cited the recent success of Quarterly Editing Project, and hopes that, in the near future, Urdu Wikipedians will rise to the position of stewardship, discharging the administrative and maintenance actions with higher implication spread across all Wikimedia projects.
The community’s achievement comes six months after Tahir Mahmood, a bureaucrat, was featured on the Wikimedia blog on achieving a record number of edits. His tally now exceeds 150,000. Second-placed Sajid Amjad has over 50,000 edits, and is the senior most active sysop since 2010.
A survey of ten active Urdu Wikipedians found the community now hopes to consolidate on quality improvement measures such as stub expansion, grammar correction, incorporating more elaborate themes and topics, as well as developing a scheme of action leading to an integrated approach for the further development of all south Asian Perso-Arabic script Wikipedias.
Among those surveyed was Ameen Akbar—who wrote the 100,000th article on the project—who emphasized the need for outreach and engaging more editors. Arif Soomro, several of whose articles have been peer-reviewed and are now in the featured category, listed his future editing priorities in the areas of Urdu, Sindhi and world literature.
Another administrator, Obaid Raza, placed stress on popularizing the Urdu keyboard and making multilingual editing user-friendly. In this direction, Usman Khan has recently embarked on the mission of creating instructional videos on how to use the Urdu Wikipedia for the first time.
A notable idea which has gained significant momentum recently as a result of the recent increase in the number of active editors is the planned coordination of Wikipedias in Perso-Arabic scripts, such as Western Punjabi, Sindhi, Balochi and Pushtu with Urdu, to ensure that these projects have the widest reach among the masses in south Asia.
Syed Muzammiluddin
Urdu Wikipedia Sysop and Wikimedia community volunteer

An Education Hackathon was conducted by Wikimedia Argentina that attracted over 400 people from around the world.
First results from the community wishlist survey are in: Danny Horn of the WMF writes that they have committed to investigating and responding to the top ten requests. So far, two are being worked on: migrating dead links to the Internet Archive, which maintains an enormous database of webpages going back to the early 2000s, and coming up with a new pageview tool to replace the occasionally unreliable alternative.
Wikimedia Endowment: The WMF is forming an endowment with funds from a legacy donor. The eventual goal for the fund is “to serve as a perpetual source of support for the operation and activities of Wikipedia and its sister projects.” More information and required legal information is available in the official announcement.
WMF needs your input on its future strategy: There is a strategy consultation with the community that the WMF needs feedback on. Executive Director Lila Tretikov writes that your time and effort will “help guide the Foundation in its work to support the movement.” An FAQ is available. The organization hopes to have a strategy in place in time for the community to review its annual budget, which community member Pete Forsyth calls “an important step toward running its finances in a more transparent and accountable way.”
#1Lib1Ref campaign wrapping up: The libraries community has an opportunity to help bridge Wikipedia’s systemic gaps. To get these people to participate, the WMF’s Wikipedia Library team is engaging them in an innovative social media campaign with the hashtag #1Lib#1Ref; organizations and associations like the Internet Archive have also lended assistance in spreading the word. Urge your local librarian(s) to join this global movement! See the official announcement, updated for January 21.
Wikimedia tutorial videos: Pre-production has started for a series of motivational and educational videos that will introduce Wikipedia and some of its sister projects to new contributors, featuring VisualEditor, Citoid (a new citation tool), and Wikimedia Commons. Translations and feedback on the script outline are needed, and there will be an office hour IRC meeting in #wikimedia-office on Monday, January 25, at 11 AM PST / 2 PM EST / 7 PM UTC.