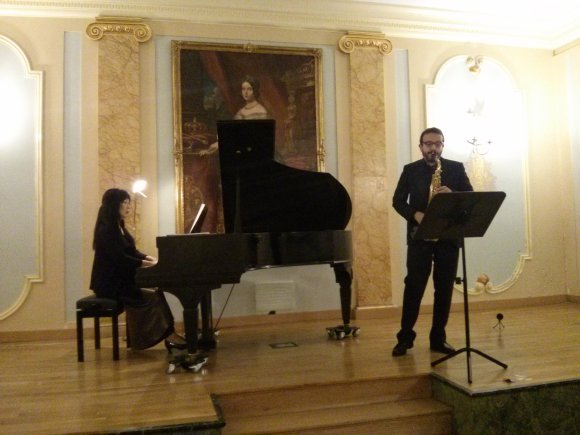 Photo by Rubén Ojeda, freely licensed under CC BY-SA 4.0.
The Museum of Romanticism has cataloged more than 16,000 museum pieces and offers collections of paintings, miniatures, furniture, decorative arts, prints, drawings and photographs collections, which offer a broad panorama of arts during the Romantic era in Spain. It also goes beyond this panorama to regularly organize cultural diffusion activities, like classical music concerts.
The museum collaborated with Wikimedia Spain, the local Wikimedia affiliate, between September 2015 and January of this year to put on a series of concerts that would be recorded and uploaded to the Wikimedia Commons, free for anyone to use for any purpose.
We ran into difficulty during the first concert, which had an audience in attendance. In the limited space where these concerts were conducted, the additional white noise—coughing or cell phones, for instance—ruined the recordings. However, the second concert was highly successful. The Wasei Duo, comprised of Kayoko Morimoto (pianist) and David Hernando (saxophonist), performed seven songs without an audience. They ranged from Claude Debussy (La fille aux cheveux de lin and a part of his Suite bergamasque), Jules Massenet, Maurice Ravel, Isaac Albéniz, and others. Hernando donated an additional 20 recordings after the conference, saying that “We are delighted and excited to collaborate in this great project to watch videos or listen to audio on a Wikipedia article that only has text and photos. It is like opening a new window on knowledge.”
A third concert took place on November 24 with the pianist Patrizia Prati. Like the duo, we recorded her without an audience and obtained 14 works in total: 12 Nocturnes and a waltz from Frédéric Chopin, and a prelude from Claude Debussy.
Prati said that “the collaboration has been very interesting and fruitful thanks to the extreme professionalism shown by Rubén Ojeda, without ever forgetting the passion for art. If I had another chance, I would not hesitate to repeat the experience because I think this kind of initiative is important for the diffusion of art and to bring music to the people.”
In January we recorded one other concert by the pianist Eunmi Ko, uploading 5 works from Debussy and Chopin.
We will be hosting at least three more concerts in the coming weeks and months. From Wikimedia Spain, we want to thank the collaboration, enthusiasm and good work of all of them. We hope this is the beginning of a fruitful relationship, and we invite all musicians to collaborate on Wikimedia projects and help disseminate free art and culture.
Rubén Ojeda, Wikimedia Spain