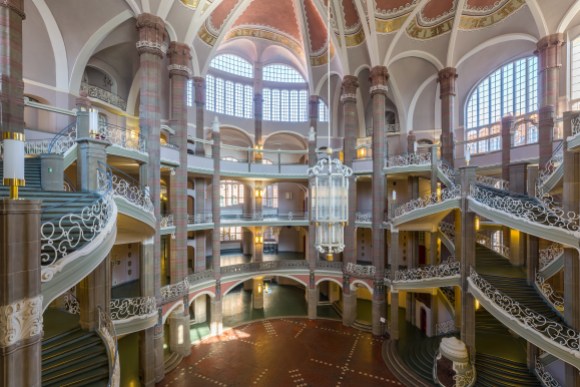 A lawyer carefully studied the arches and staircases of the Berlin district courthouse as he came and went for work, “not always liking the place.” One afternoon the crowds disappeared, the light from the towering windows softened, and Ansgar Koreng captured its elaborate elegance for first place in the contest. 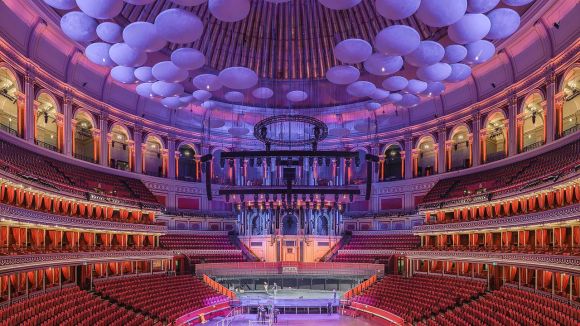 Colin, from Britain, waited for Open House London to take a photo of Royal Albert Hall. He hauled a tripod to the central box of the grand tier, and set to work, hoping the light wouldn’t change as he pieced together a high-resolution composite image, giving music lovers a glowing view of the legendary venue. The photo took second place. 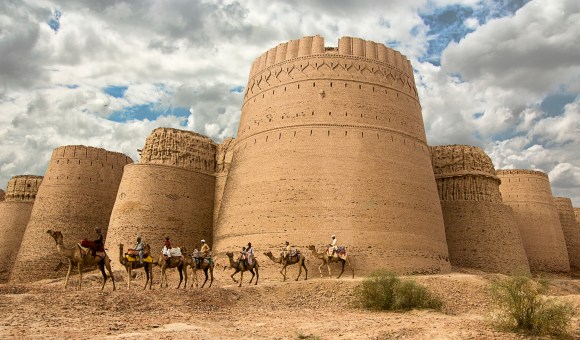 Tahsin Shah, a Pakistani police chief, drove 500 kilometers pursuing the “romance and decaying glory” of the ninth century Derawar Fort. He captured a camel caravan strung along its bastions, a scene that could have taken place 1,000 years ago, for tenth place.

Beginning photographer Vladimír Ruček likes to hike the mountains of his homeland, Slovakia, sleeping in “a million-star hotel,” alone under the night sky. He photographed the old stone Čachtice Castle greeting the morning sun and took thirteenth place.

Welcome to the largest photo competition in the world—by the world and for the world. Wiki Loves Monuments drew 277,365 entries from 10,748 participants this year, the largest pool of submissions of any photo competition. Volunteers go through all of those, first on the national level, then for the global finals. Above are some of the stories behind the top 15 photos—winnowed all the way down from the more than a quarter-million—and announced today.
Lawyer Ansgar Koreng placed first, winning a €1000 prize, Colin’s Royal Albert Hall photo placed second, Pakistani police chief Tahsin Shah placed tenth, and Slovakian hiker Vladimír Ruček placed thirteenth.
Like Wikipedia, Wiki Loves Monuments is a sprawling enterprise filled with fascinating diversity. Winners represent the world’s best photos of the cultural heritage in 42 nations. Museums and observatories, old mills and modern architecture. If Wikipedia is the story of the world, Wiki Loves Monuments could well be its most beautiful slide show.
The contest, started in 2010, judges photos submitted via Wikimedia Commons, the 36 million-file free media repository for the Wikimedia movement. The photos help illustrate articles about countries’ national monuments on Wikipedia, and are freely licensed for everyone to appreciate. In fact, one of the main criteria for judging is “Usefulness of the image on Wikipedia.”
Wiki Loves Monuments also introduces some contributors to the collaborative Wikimedia culture. This year around 8,500 people used a new Wikimedia account to submit photos to the competition, something that generally correlates to having never before contributed to Wikimedia projects.
Every nation has its own 10 winners who compete at the global level. One German photographer, the Wikimedia Commons user Tilman2007, submitted 16,507 photos this year, and has submitted 46,352 to Wiki Loves Monuments since 2011 and 102,875 to Wikimedia Commons in total with the help of uploading tools. Another participant, Francesca, submitted one-half of a photo, and was a finalist in Italy. Francesca submitted a glowing photo of the Church of Santa Maria De’ Armeni in Matera, which she took with a collaborator, her boyfriend. She only submits photos taken with her boyfriend; it is entirely a labor of love.
One thing is true about all of them, and all contributors to Wikimedia projects. As the photographers capture national treasures, they invest something of themselves.
Albrecht Landgraf of Germany took a roadtrip with his family in Saxony where one side of his family is from. “All our relatives in this area passed away years ago, and the remaining family is spread out all over Germany.” They drove back in through family history to a park in Gablenz. “That’s when we found this little gem,” he said, “in a small village.” 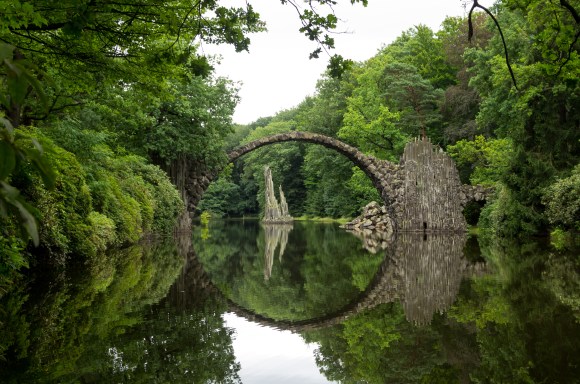 His fourteenth place photo is an emerald, a quiet photograph of a serene lake garlanded with lush greenery with the arc of a bridge perfectly meeting its reflection in the water.  His family may have long since left Saxony, but Albrecht returned to rediscover his roots—and left the region a gift.
For more information on the winning photos and the 2016 competition, go to www.wikilovesmonuments.org.
The other ten images follow—the first, second, tenth, and fourteenth places are above. 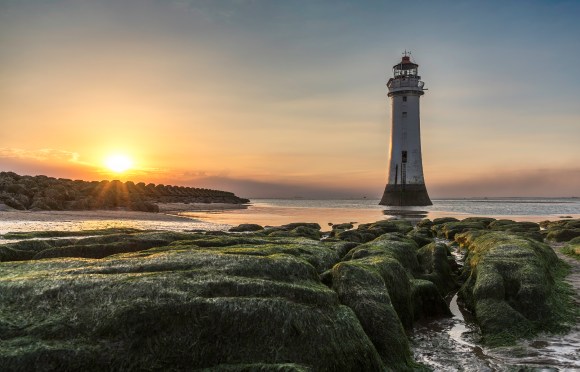 Third place. Richard, an amateur photographer, went back to the same spot where he started his photographic hobby to get this shot of Perch Rock Lighthouse, United Kingdom. (Richard J Smith) 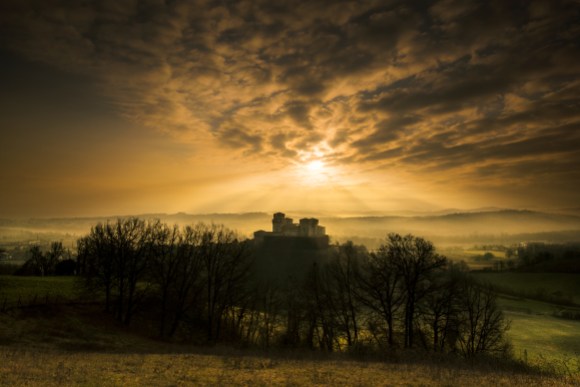 Fourth place. The hills of Emilia-Romagna in Italy are the home of the Castle of Torrechiara, seen here at sunset. (Lara Zanarini) 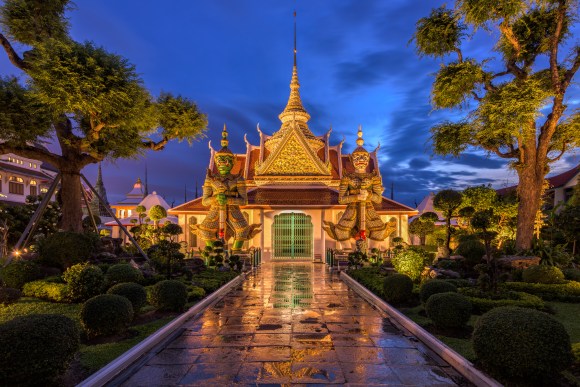 Fifth place. The two mythical giant demons Thotsakan (left) and Sahatsadecha (right) guard the Buddhist Wat Arun temple in Thailand. The photographer journeyed to the temple  waited for hours to take this shot of the temple at twilight after a journey via the Chaopraya River. (Janepop Atirattanachai) 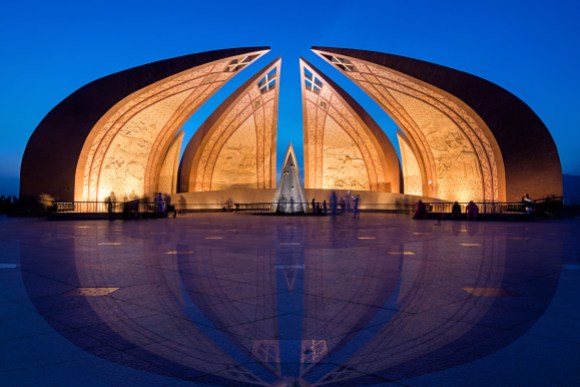 Sixth place. The blooming flower of the Pakistan Monument is seen here during the blue hour. The photographer traveled from Lahore to Islamabad to share this view of Pakistan’s symbol of unity with the world. (Muhammad Ashar) 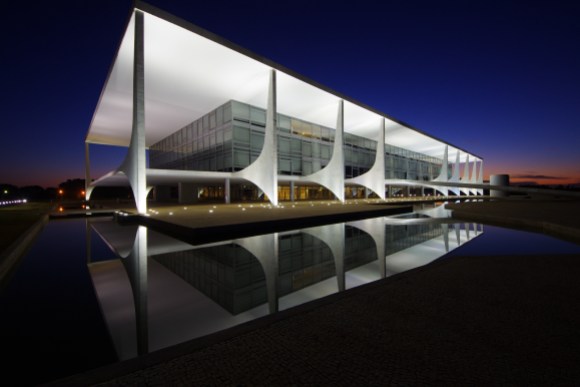 Seventh place. “At the right place, at the right moment” and many years of experience culminated in this illuminated Planalto Palace at sunset, where the photographer was able to capture the contrast between Brazil’s presidential palace and its surroundings. (Gastão Guedes) 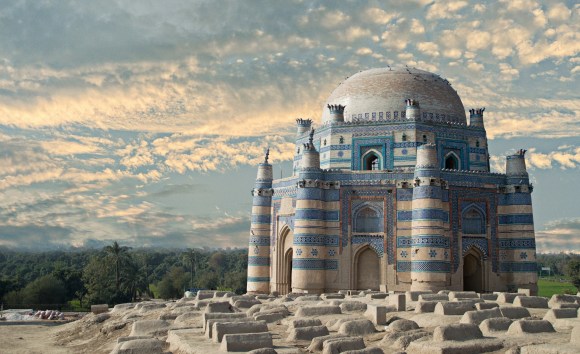 Eighth place. The octagonal three-tiered shrine of Bibi Jawindi, located in the historical city of Uch, Pakistan, was built in 1493 for the great-granddaughter of a Sufi saint. (User:Usamashahid433) 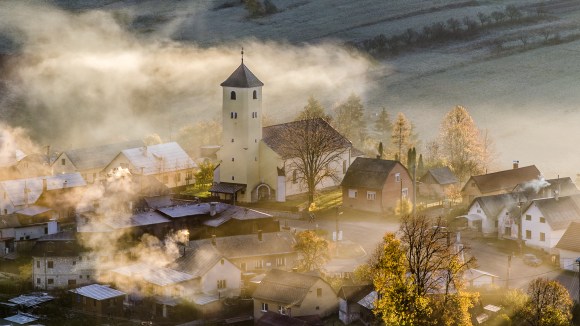 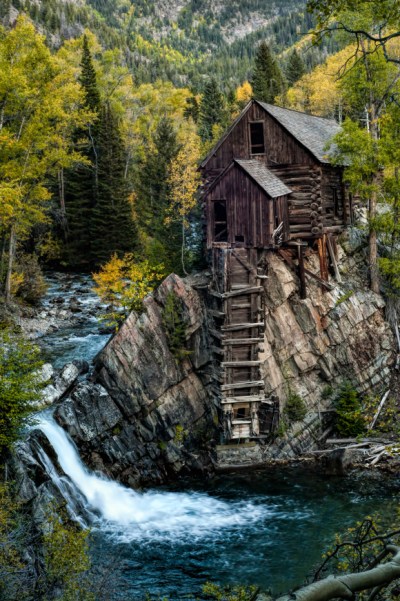 Eleventh place. A beautiful day in September at Crystal Mill just before sunset. The Mill is an old power generation plant that supplied hydroelectricity to the mining town of Crystal, Colorado in the United States. The road to Crystal Mill is a tricky one to drive; the photographer had to negotiate a narrow road with steep drop-offs to capture this shot. (Joe Sparks) 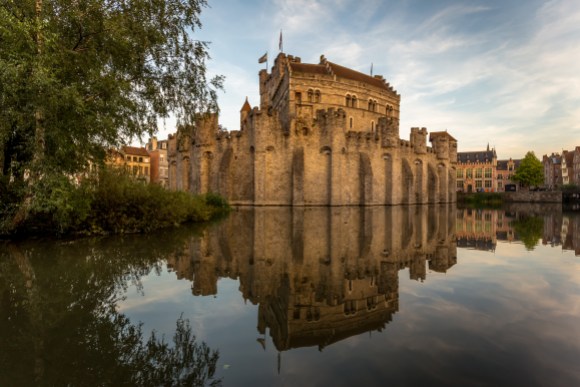 Twelth place. Gravensteen castle in the center of Ghent, Belgium, has been a witness to history since the Middle Ages. The photographer waited for days for this moment, as it depended on sunset rays that would give the building a warm glow. (David Horvath) 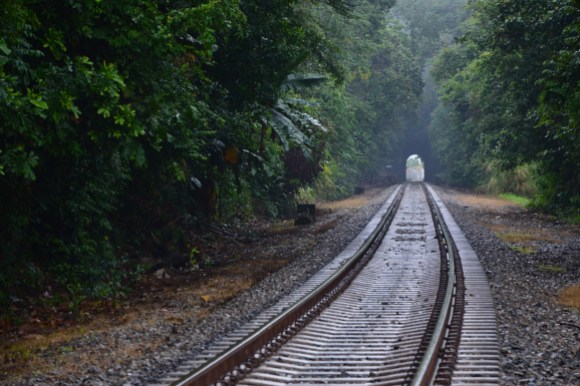 Fifteenth place. The photographer, a long-time Wikimedian, was traveling in Panama on a rainy day with dim lighting conditions. They decided to take a shot of the Panama Canal Railway, an instrumental component in constructing the canal. (Ivo Kruusamägi)

With one exception, all photos used in this post are freely licensed under CC BY-SA 4.0. The first place image, featured at the top of this post, is CC BY 3.0 DE.