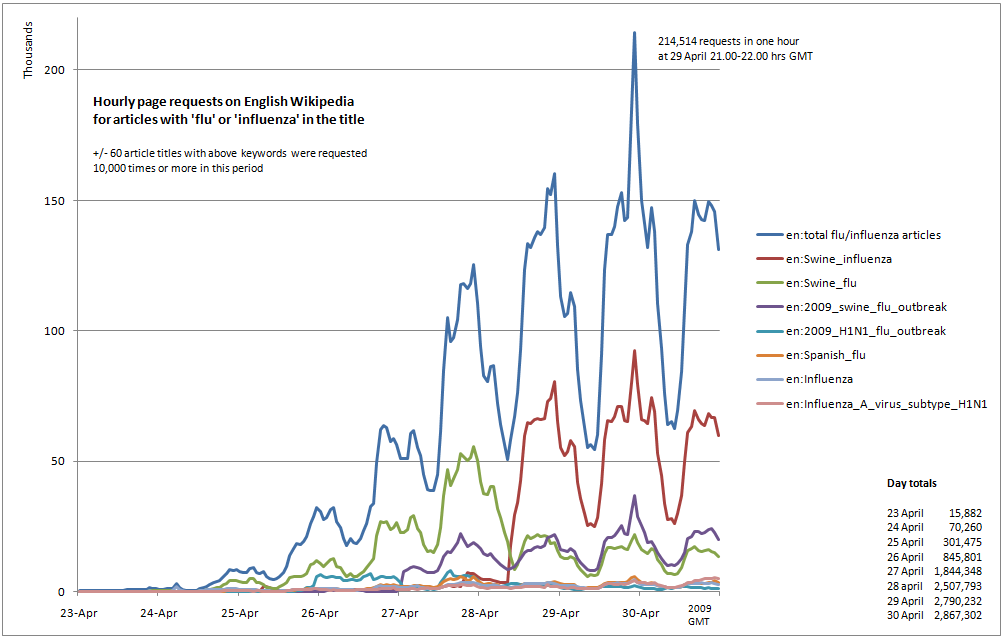 Every day millions of people access health information online. We have recently seen some new hard evidence of Wikipedia’s growing prominence as a health information resource. The rapid development and traffic on the English Wikipedia of an article on the 2009 flu pandemic demonstrates this trend.
Since the pandemic broke out in April 2009, Wikipedia has been one of the major sources of information about the topic. Click the “history” tab of the article, and you will see the fascinating story of hundreds of volunteers donating their time and knowledge to make all facts about the swine flu outbreak accessible to millions of readers around the globe. Started on April 24 as a small article of scarcely more than 200 words, the entry in its current version fills more than 21 printed pages and contains a large number of tables, charts, images, citations and references.
And that is just the story of the new article on the pandemic. A quick glance at the page requests for flu and influenza related articles on the English Wikipedia tells a larger story of Wikipedia’s significance for those seeking health-related information online. Whereas these flu-related articles got about sixteen thousand page hits on April 23, this number increased to dizzying 2.86 million page hits only a week later (see chart).
The significance of Wikipedia as a source of online health information has lately been measured by Michaël Laurent and Tim Vickers, both Wikipedia contributors. In an article published by the Journal of the American Medical Informatics Association (“Seeking health information online: does Wikipedia matter”), Laurent and Vickers showed that Wikipedia ranked among the first ten results in 71–85% of search engines.
Now Vickers and Laurent are among the volunteers organizing a Wikipedia Academy with the National Institutes of Health (NIH), the first to be staged in the United States (see our press release). The Academy model was pioneered by Wikimedia Germany in 2006 and has since been replicated by other Wikimedia chapters around the globe. The event series aims at engaging people who are not familiar with wiki culture or communities.
In this one-day event, to be held in Bethesda, Maryland, on July 16th, experienced volunteer Wikipedia editors will talk about Wikimedia’s mission and orient the audience to Wikipedia’s structures and community policies. Medical researchers and other staff members of the NIH will learn how to contribute to Wikipedia’s content and engage with other Wikipedians to further increase Wikipedia’s quality and credibility.
Frank Schulenburg, Head of Public Outreach