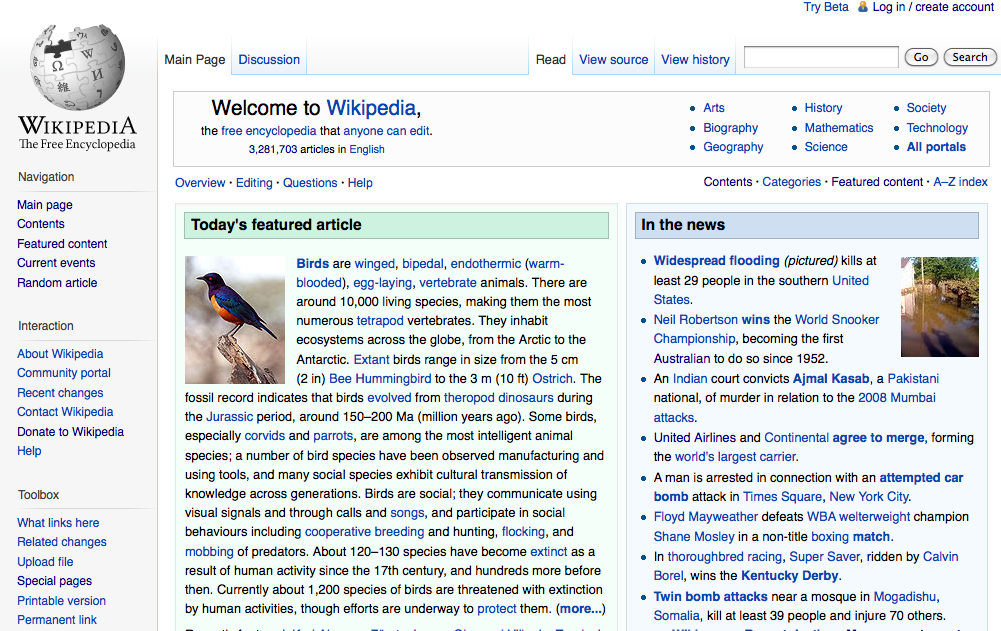 (Update 2: The search interface was updated on May 20. This update addresses the problems where search query is truncated under some circumstances, and the problem that search suggestion is cut-off. Thank you for your prompt feedback.)
(Update: We have received problem reports and feedback that search queries were truncated sometimes and the search suggestions were hard to read due to the limited width. In order to mitigate the problem, the new search function was disabled and the search field was increased by fifty percent. We also have updated the new search interface which we are currently staging on the prototype. This updates address the reported issues such as truncation of search queries and the problems that search suggestions are cut-off. Prototypes in various languages are also available here. Please try it out and let us know your feedback. Thanks!)
Wikipedia has some new improvements, thanks to the hard work and dedication of over half a million beta testers and volunteers who worked with the Wikimedia User Experience team over the last year!  With a beta testing group of 635,000 people and an 83% user retention rate, we’re proud to introduce you to Wikipedia’s new look and feel.  As of 8:00am UTC today, the new features moved from beta and will be available for everyone to use.  This is the first major initiative the Wikimedia Foundation and its volunteers have ever undertaken for Wikipedia’s interface. And there’s more to come.
It’s been one year since we began the usability initiative, and we’ve rolled out the new interface to Wikinews (English and Serbian), Wikimedia Commons, and now English Wikipedia. That means that hundreds of millions of people around the world will now experience an easier to use, and more importantly, easier to edit Wikipedia.  Our most recent interface launch, on Wikimedia Commons, was a great success with continued adoption by over 91% of Commons contributors. Over the next few weeks, the new interface will cascade to all language Wikipedias.
Here’s what’s new:

We kicked off this effort in April 2009, and immediately went to work to figure out how to make Wikipedia easier to use for everyone.  We started with usability testing among everyday readers with no editing experience, and we learned about the way people interact with Wikipedia and how we could make the experience better.  Using this valuable information, we incrementally released new features to users who opted into our beta testing group.  Over the next several months, we continued to improve the features based on feedback from both our beta testers and from usability studies we conducted.  We’re thankful for the input of thousands of international users and volunteers who gave us feedback on our progress.

During our initial beta testing phases, 81% of Spanish and Portuguese Wikipedia beta participants kept using  the new editing interface. Seventy to seventy-nine percent of German, Russian, Chinese, French and Italian Wikipedia beta users also maintained the new interface. Retention rates for Polish and Japanese were relatively low in the beginning (65% and 60%, respectively). Since then, we used feedback directly from our users all over the world to increase the quality of the interface and design.
If you prefer the classic interface, called monobook (without the enhancements), don’t worry, you can click on the “Take me back” link at the top of the page to go back to the previous interface.  You’ll also be able to return to monobook interface whenever you’d like.
With the support of hundreds of thousands of volunteers and the generous support from organizations like the Stanton Foundation, we’re making our projects easier for people from all parts of the world to contribute and access high-quality free educational information, which is central to our mission here at the Wikimedia Foundation.
This isn’t the only project we plan to release to make it easier to use Wikipedia, and all of our Wikimedia projects; it’s just the first.  We’ve built an FAQ and feedback page which we encourage you to use — any feedback is valuable and will help us make our projects better.
We’d like to thank the many volunteers who have supported the User Experience team since this project began, as well as the Foundation’s donors and supporters.