Earlier in June, Germany’s first Skillshare conference took place under the patronage of Edelgard Bulmahn (Member of Parliament, former Federal Secretary of Education).  The conference set new standards for community events in the German-speaking Wikimedia universe. More than 150 volunteers from free content projects met in the picturesque town of Lüneburg; the attendees included young artisans, university members, politicians, media, and Lüneburg citizens. The conference aimed to strengthen the free content community, gain attention from media, and recruit new authors to free content projects, which do not fall into the category of usual suspects for male computer scientists in their twenties. Skillshare was conceptualized as an open platform for exchanging ideas between free content communities.
The conference featured a three-day in person meeting between 34 open space workshops  on topics like OpenStreetMap, programming bots, quality management, conflict resolution,  and effective use of sources. But community building involves not only formal training, but also informal chats. Lueneburg’s pubs were brimming with excited Wikipedians chatting about the latest monobook extensions, neutral point of view in advertising cell phones, or their favorite beers. No less than 150 of the most active volunteers thus learned that there is life beyond the keyboard.
Likewise, the citizens of Lueneburg and the regional small artisans association (the event’s host) learned that real people write Wikipedia. Some even got hooked on writing Wikipedia entries about their own trade or town. More than 1400 photos and 40 old maps from the city’s archive were some of outcomes of the conference.
Big politics and the media joined the event for a discussion on New Media, attended by Kai Gniffke, chief of staff of main German evening news TV program, three members of the Parliamentary subcommittee for new media, University of Lüneburg, and Wikimedia’s own Ting Chen. 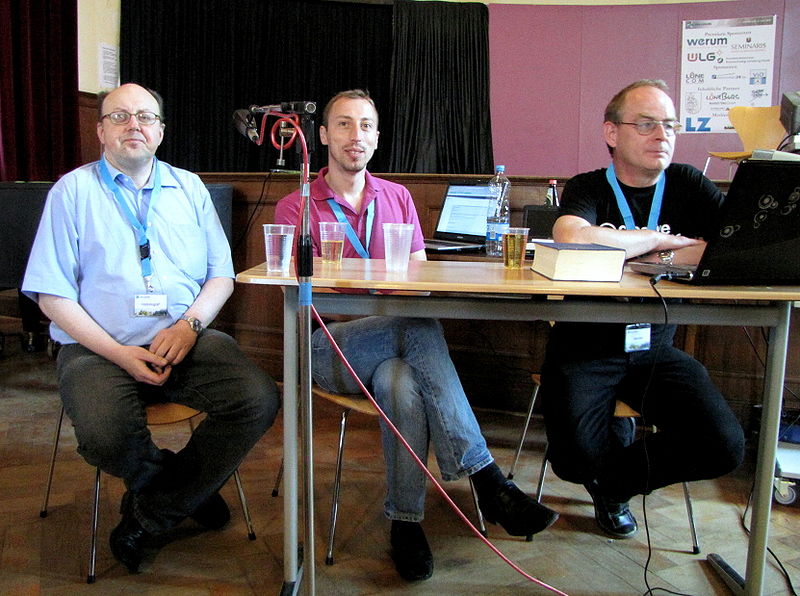 The event also broke new ground in its funding model. Wikimedia Germany and Wikimedia Switzerland covered a small part of the costs, while local businesses and associations contributed the bulk of the funds. Wikimedia Switzerland and Wikimedia Austria offered travel stipends. The funding model created effective ties to the universe outside of Wikipedia/Wikimedia, which means additional funds, but more importantly, new blood for a larger open content community. The event also strengthened connections between Wikipedians, many of whom had never met in person. It also brought together members of different free content projects like Wikisource, Wikiquote, and OpenStreetMap.
It certainly was the most effective and lively event for the German-speaking community to date, and, bar the not-invented-here-syndrome, it might serve as a pilot project for other languages.
Nadine Stark, co-organizer, Skillshare