Some kind people at Qualys have surveyed versions of open source web apps present on the web, including MediaWiki. Here is the relevant page from their presentation: 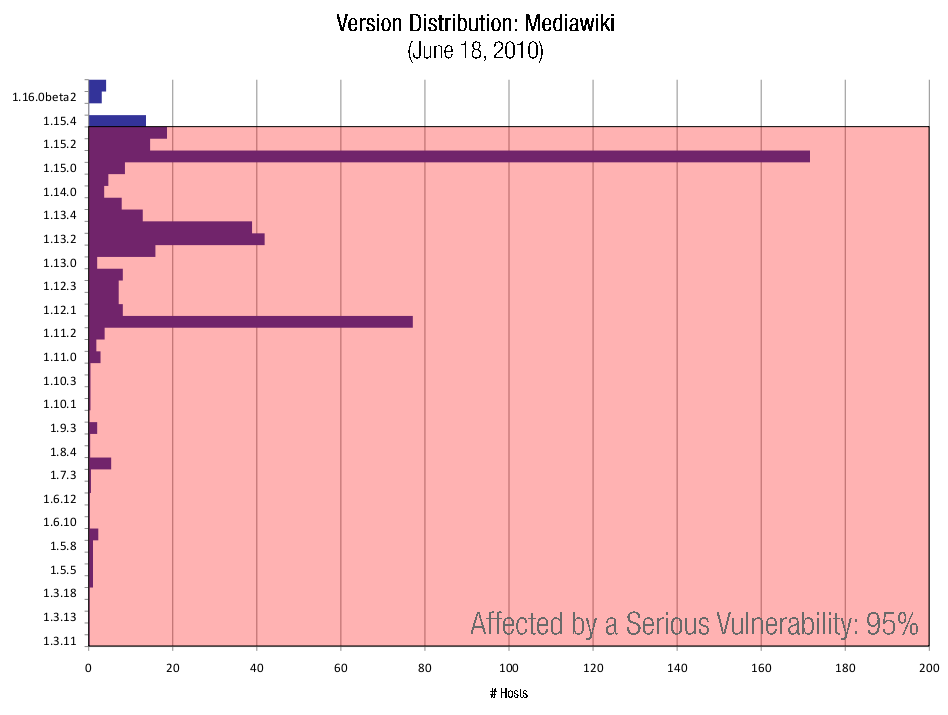 For the original see:

And the press release:

They make the point that 95% of MediaWiki installations have a “serious vulnerability”, whereas only 4% of WordPress installations do. While WordPress’s web-based upgrade utility certainly has a positive impact on security, I feel I should point out that what WordPress counts as a serious vulnerability does not align with MediaWiki’s definition of the same term.
For instance, if a web-based user could execute arbitrary PHP code on the server, compromising all data and user accounts, we would count that as the most serious sort of vulnerability, and we would do an immediate release to fix it. We’re proud of the fact that we haven’t had any such vulnerability in a stable release since 1.5.3 (December 2005).
However in WordPress, they count this as a feature, and all administrators can do it. Similarly, WordPress avoids the difficult problem of sanitising HTML and CSS while preserving a rich feature set by simply allowing all authors to post raw HTML.
If you are running MediaWiki in a CMS-like mode, with whitelist edit and account creation restricted, then I think it’s fair to say that in terms of security, you’re better off with MediaWiki 1.14.1 or later than you are with the latest version of WordPress.
However, the statistics presented by Qualys show that an alarming number of people are running versions of MediaWiki older than 1.14.1, which was the most recent fix for an XSS vulnerability exploitable without special privileges. There is certainly room for us to do better.
We have a new installer project in development, which we hope to release in 1.17. It includes a feature which encourages users to sign up for our release announcements mailing list. But maybe we need to do more. Should we take a leaf from WordPress’s book, and nag administrators with a prominent notice when they are not using the latest version? Such a feature would require MediaWiki to “dial home”, which is controversial in our developer community.
Tim Starling, Lead Platform Architect