Today, the National Archive of the Netherlands and Spaarnestad Photo announced a partnership to release more than 1,000 photos of politicians and political events in the Netherlands.  This generous release will provide photos for many related Wikipedia articles that once had no image to accompany the article.
Thanks to this cooperation between Wikimedia Nederland and Nationaal Archief/Spaarnestad Photo, hundreds of articles on Dutch politics will be provided with relevant and free photos from the actual time of the event or when the person was alive.
When an article is about an ancient topic, it is relatively easy to find an image for the article, because it is usually in the public domain. When the topic is recent, finding an image is often difficult.  One of the best ways to get a good photo is through partnerships like this.
One of the example images is this photograph of Queen Juliana, the mother of the current queen, walking her dog. This photo is a clear example of the saying “an image is worth more than a thousand words”. The image is such a clear illustration of who she was – irreplaceable with words. 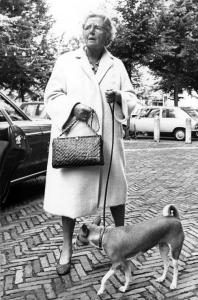 Another example here is the typical “bordesfoto” (photo on the landing), which is the council of ministers and the Queen presenting themselves on the stairs in front of the royal palace to the press right after the ministers have been sworn in. This photo is the bordesfoto of the first cabinet Biesheuvel in 1971. 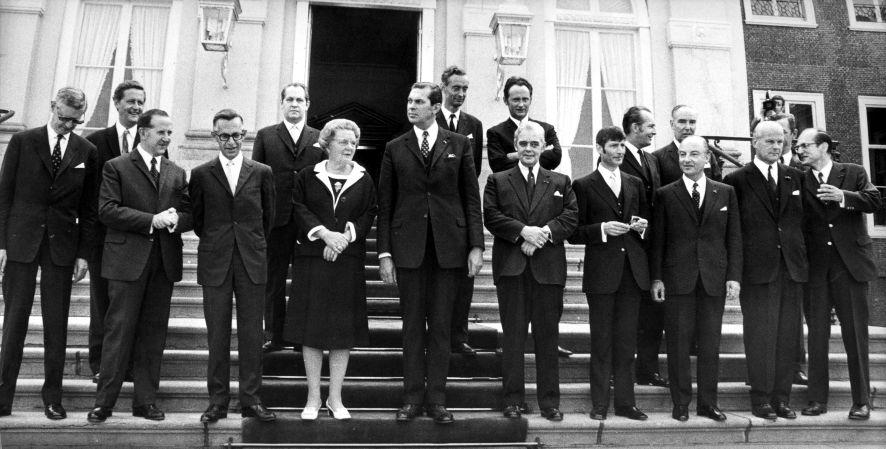 The images are part of the project “Beelden voor de Toekomst” (images for the future), where four major institutions cooperate to conserve and digitize the Dutch audiovisual heritage. The digitized material is made available as much as possible to the educational sector and the public.
I am very excited with this cooperation, and hope that soon more institutions will follow the example of the National Archive. Maybe just as exciting is that this release took place in the very center of political press in The Hague – Nieuwspoort. The release event was accompanied by a panel of former and current politicians amongst whom the former chair of the Tweede Kamer der Staten-Generaal (House of Representatives/Commons), Frans Weisglas and former minister and UN high commissioner Jan Pronk.
I invite everybody to incorporate the images on their language projects as they become available in the near future on Wikimedia Commons.
Lodewijk Gelauff
Vice Chair of Wikimedia Nederland