In 2009 the Wikipedia Usability Initiative performed research on how to improve the usability of MediaWiki by watching users as they performed various tasks on Wikipedia. Each of the problems that were identified were then matched with potential solutions which were then filtered by technical complexity and user impact. During the development process, yet more features were filtered out because of resource limitations, many of which had even been designed, but never finished.
In a joint effort between members of the Wikimedia Foundation’s community and engineering departments, many of these ideas, as well as some new ones based on ongoing research are being developed and deployed as a series of brief experiments. 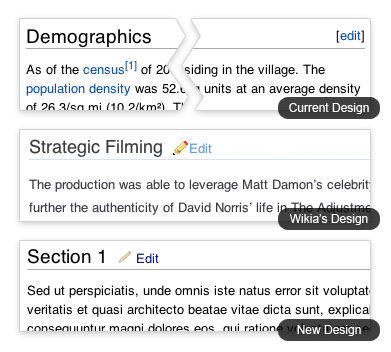 The first of these experiments is a redesign of how section edit links are displayed. The current design displays the section edit link on the opposite side of the heading text. During research, users often became confused about which section the link was related to, sometimes associating it with the section above rather than below. Other users did not find the links easily, or in some cases at all. The proposed design was to move the links to be displayed together with the heading text, and to add a small pencil icon to draw attention to the link. This feature was designed but never finished. At the same time as this research was being conducted, Wikia designed and deployed a very similar change to their sites, and reported a measurable increase in the use of section edit links on their wikis as a result of the change.
The experiment is scheduled to be conducted on English Wikipedia from March 9th, 2011 to March 16th 2011, during which time a small fraction of users will be randomly selected to participate in the experiment. During the experiment anonymous statistics will be collected using the ClickTracking extension. Data collected will be used to improve the user experience of Wikipedia and other sites running on MediaWiki. If you would like to abstain from participating in this and other experiments in the future, you can select the “Exclude me from feature experiments” option in your user preferences.
Trevor Parscal, Lead Features Engineer