Last month we presented findings from an experimental qualitative analysis of the first edits by new contributors to English Wikipedia in 2004 and 2011. Assessing these edits, we discovered that the majority of initial contributions in both of those years were of acceptable quality according to Wikipedia standards.
But we did not extend that study over all years, and we didn’t look at the complete contribution history of each new crop of editors to see if they edited in good faith overall. In the past week we’ve done exactly that. 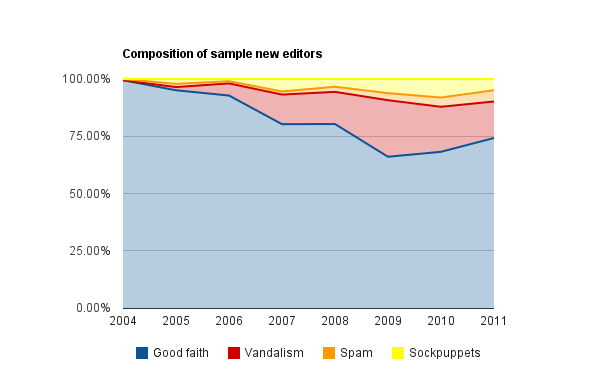 Our randomized sample is of about 150-200 new editors to the English Wikipedia each year, sampled from February. As you can see, a clear majority of new editors in the sample participated in good faith. The good faith participation reached its lowest proportion in the sample at a little over 66%.
Note that “good faith” does not refer to whether edits were very high quality, only that editors did not act in clear, intentional disregard for the pillars of Wikipedia. Another practical note: identifying when an account is a duplicate made by a previous editor (i.e. a sockpuppet) is quite difficult, so for our analysis only editors blocked specifically for abusing multiple accounts were counted as such.
We also calculated a projected amount of editors who would fall into each of these categories, based on the comprehensive number of new editors each February from stats.wikimedia.org. The chart below represents these projected total numbers. 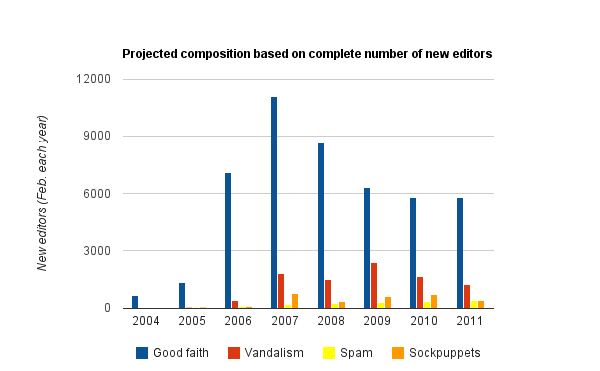 If our samples are correctly representative of the whole new editor population, there were about four times as many new good-faith editors who began contributing in February 2011 as in 2005.  While there has been an increase in the amount of vandals and spam since 2006, the proportion of such bad faith participation has not continued to grow exponentially.
Steven Walling and Maryana Pinchuk,
Wikimedia Foundation Fellows
(This is one in a series of posts about the ongoing research within the Community Department at the Wikimedia Foundation. Methodologies and results are very much experimental, and as such should be looked at with a skeptical eye. You can take a closer look at our data and other experiments on Meta.)