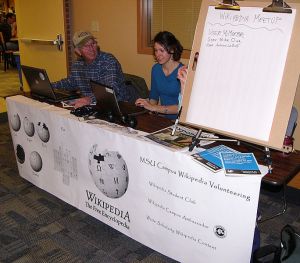 Mike Cline is a long-time Wikipedia contributor, and Bonnie McCallum is a long-time Wikipedia evangelist — together, they form the Campus Ambassador pod at Montana State University. And over the course of the last five months, Mike and Bonnie have transformed Bozeman, Montana, into a Wikipedia hub.
They’ve supported MSU Professor Kristin Ruppel’s class, “Federal Indian Policy and Law,” this term, as she assigned her students to edit Wikipedia articles as part of the curriculum. They are starting a Wikipedia student club on the Bozeman campus. They had a Wikipedia information table set up in the student union building. They’ve set up office hours in the university library, where they answer student questions related to Wikipedia. They’re preparing to present about their Wikipedia experiences to the Tribal College Librarians Institute in June, and they’ve already registered for a Wikipedia booth at Catapolooza, a campus-wide festival in August.
“I believe it’s important to demonstrate to academics that Wikipedia is a place of scholarship and that academia should be engaged and participating in Wikipedia,” Bonnie says. “So far, I’ve not met, or talked to, or emailed a single person who does not use Wikipedia, and it is fun for me to be able to tell folks that MSU-Bozeman has a graduate class that instead of writing term papers writes articles to Wikipedia.”
The Wikipedia Ambassador Program originated with the Public Policy Initiative, but it’s been growing ever since. Volunteer Campus Ambassadors like Bonnie and Mike work in class with students who have been assigned to edit Wikipedia for part of their course grade. Online Ambassadors are their virtual counterparts, helping students on-wiki and through IRC. Campus Ambassadors can be either experienced Wikipedians like Mike or new editors who have a lot of enthusiasm for teaching others about Wikipedia like Bonnie.
“The best part about being a Campus Ambassador is the opportunity to work with young students and adults on interesting academic subjects and the opportunity to convince academia that Wikipedia is indeed a valuable and reliable source of scholarship,” Mike says. “Students who took their Wikipedia assignment seriously were sincerely appreciative of the mentoring and help provided by the Ambassadors.”
Mike and Bonnie supported Professor Ruppel’s students via in-class presentations on Wikipedia editing and culture, Q&A sessions, pep talks, weekly office hours in the academic library, one-on-one counseling by appointment, and a class-time lab session in the library computer classroom. Bonnie, on staff at MSU Bozeman, got the library blog to post an item about their project, and the student newspaper covered their activities as well. Each of Bonnie and Mike’s outreach activities brings more people on board to their new Wikipedia student club, whose activities will begin in the fall term.
“Everyone, students and staff alike, always respond with ‘I use Wikipedia!’ Then they immediately add something like ‘That’s cool!’ or ‘How does that work?’ or ‘I had no idea that was going on,’ or ‘But I thought Wikipedia couldn’t be trusted,'” Bonnie says. “Telling people about being a Wikipedia Campus Ambassador opens up a door to conversations about their own Wikipedia experiences, and we can explain about neutral point-of-view, tertiary source, verifiability, notability, the history tab, and other projects at Wikimedia besides Wikipedia. Most folks are surprised to find out they’re already empowered to become active Wikipedians. They’ve just never thought about Wikipedia from the collaborative, participative perspective before.”
As the spring term wraps up, Bonnie and Mike are busy meeting with Professor Ruppel to debrief about how the first term went. Professor Ruppel is already planning to use Wikipedia again in her class next term, and Bonnie and Mike are identifying what worked best and what they should do differently next time around. They’re also trying to recruit more Campus Ambassadors on the MSU-Bozeman campus. And they’d like to expand Wikipedia Campus Ambassador presence to the entire Montana University System: all Montana State University (MSU) system campuses, all University of Montana (U of M) system campuses, all seven Montana Tribal Colleges and three Community Colleges, and all three Montana Independent Colleges. They want to see Wikipedia editing as part of the curriculum in every college in Montana.
It’s an ambitious goal, but if anyone can do it, it’s Bonnie and Mike. In Mike’s regular job, he teaches and mentors groups of corporate leaders and teams on a variety of business processes, so expanding his teaching to Wikipedia is a logical step. Bonnie’s professional experience in the semiconductor and IT industries gave her a deep appreciation for open-source, shared knowledge, tools, and applications.
“Volunteering my time and energies in support of a worldwide free-access, neutral point-of-view, and verifiable information repository such as Wikipedia is a path I am willing to travel,” Bonnie says. “Wikipedia Campus Ambassadorship is for those who like a challenge, are comfortable working with unknowns, like working with others to solve problems, and enjoy constantly learning new stuff. Nothing is written in stone. In fact, there are no stones. The upside to the days when one is feeling like you’re walking around in a wiki-daze is that you know you’re building something wonderful for the whole world to use for free. You just steady-on.”
LiAnna Davis
Communications Associate – Public Policy Initiative