On the other hand, editing Wikipedia has tended to become harder over time, and the likelihood that new users will receive correction/criticism has increased. This is reflected by various efforts to code and analyze the experience of new users, such as the recent Newbie teaching strategy research sprint undertaken within the scope of our Summer of Research.

This chart shows the relative increase and decrease in warning messages, praise/thank you messages, criticism and teaching messages over time.

The drive for quality and reliability has led to the development of sophisticated automation mechanisms that aid in socializing new users to Wikipedia’s norms, policies and conventions. The act of expressing appreciation for other users, by contrast, is a largely manual effort. Whether it’s welcoming new users, inviting users to participate in specific topics or discussions, recognizing effort using barnstars and trophies, or just sending a whimsical note, expressing appreciation is not an activity that is facilitated by the software — in spite of its known importance for people’s likelihood to want to edit.
WikiLove is a simple experiment in appreciation. It makes it easy and fun to send barnstars or whimsical messages of appreciation to other users. The tool was first built by Wikimedia Foundation developer and Wikimedian Ryan Kaldari as a small gadget, and the new editor engagement team at the Wikimedia Foundation has developed it into a full feature over the last few weeks.


How you can help
Currently, the Wikilove extension is only deployed on our prototype site.  While it’s a simple feature, we would still appreciate your help in testing and evaluating it.  To do so, create a test account on prototype (please remember to check the “remember me for 30-days” box — sorry, there is a known bug on prototype that requires the box to be checked).  Once your test account created and you are logged in, visit any userpage or user talk page.  You will notice a red heart icon to the left of the search box.  Click on the icon, send WikiLove, and let us know what you think by providing feedback on the WikiLove talk page. 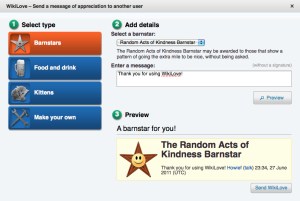 What’s next
Our plan is to enable WikiLove on the English Wikipedia on June 29 (we may push the date depending on any issues surfaced). Users will be able to disable the WikiLove feature by going to My Preferences → Editing → Labs Features and unchecking the box that is labeled “Enable showing appreciation for other users with the WikiLove tab (experimental)”.
The tool has built-in tables that will help us measure how frequently WikiLove is used, and allow us to understand whether its usage actually affects (new) editor activity. Irrespective of that, we’re also interested in exploring tools specifically built for welcoming new users and inviting them to edit articles related to their expressed interests.
We’re not presupposing that we know how appreciation can best be expressed in the many different languages and cultures that make up the Wikimedia community. The selection of barnstars and other forms of appreciation that we’re starting with is just that — a selection. Wiki administrators will be able to modify the user interface by following the instructions for customization — so that whether you want to award gifts of chocolate or stroopwafels or baklava, you can do so!
Howie Fung
Senior Product Manager, Wikimedia Foundation
Erik Moeller
Deputy Director, Wikimedia Foundation