Wikipedia is undoubtedly the most successful collaborative online experiment in the history of Internet. Wikipedia editors spend hours writing and researching articles that have made the project the success that it is today. But have you ever wondered what other online activities Wikipedia editors participate in? Results from the Editor Survey, April 2011, show that apart from the time that they spend online editing Wikipedia, editors are a lot like other Internet users: emailing, using Facebook, watching online videos on YouTube or other sites, using Instant messaging services like AIM and Google Talk, using Twitter or other similar micro-blogging platform.
Facebook is clearly more popular with Wikipedia editors than Twitter.  Sixty-eight percent of Wikipedia editors use Facebook compared to only 30% who use Twitter. Online gaming is not a popular online activity for our editors. Only 18% of Wikipedia editors play online, multi-player games likes World of Warcraft and 18% play online games like Farmville or Cityville.  Like the rest of the Internet population, using location-aware services like Foursquare has not taken off with Wikipedia editors with only 11% using these types of services.  The Wikimedia movement has had a strong affinity to open source and openness in general, so it is no surprise to see that some editors (22%) contribute to open source software. 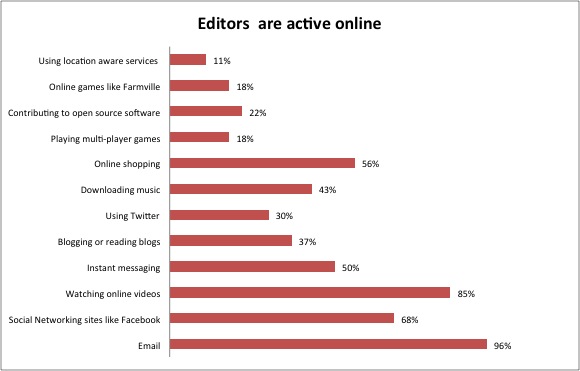 We also researched what kinds of contributions editors make across several social media platforms like Facebook, Twitter, blogs etc. Facebook dominates contributions in social media with more editors posting or commenting on status updates, and liking content on Facebook. Since fewer editors are using Twitter, fewer editors tweet or interact with other Twitter users. Blogging continues to be a platform for sharing for about one-third of editors.  Our data clearly shows that Wikipedia editors not only contribute to Wikipedia, but are contributors to different social media streams too. 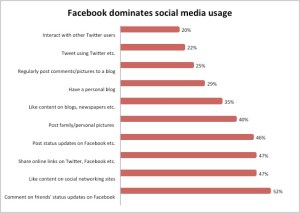 Helping us better-understand Wikipedia editors’ activities around social media helps us make better decisions about which new features and technologies we should research for MediaWiki, the software that powers Wikipedia and thousands of other wikis online.  This data also helps us determine new ways of improving dialog and communication among Wikipedians, both on-wiki and off.
Mani Pande, Head of Global Development Research
(This is the fifth in series of blog posts where we will share insights from the April 2011 Editors Survey)