The Wikimedia Foundation has made a strategic goal of increasing volunteer participation, in particular by encouraging women to edit Wikipedia.  In the Wikipedia editors survey we analyzed the edit history of male and female editors to look at the key differences between the two genders. An analysis of self-reported edits by gender shows significant differences at the lower and higher end of the editing spectrum, but also shows relatively similar patterns between edit counts by men and women in the middle of the spectrum.
While women editors are more likely to make 1 to 50 lifetime edits compared to men, male editors are more likely to make more than 10,000 + edits compared to women. One-third of women editors reported that they had made between 1 to 50 edits, compared to 18% of male editors. On the other hand, a higher percentage of men (23%) reported having made upwards of 10,000 edits, versus 18% of female editors. There are no statistically significant differences among men and women editors within other groups based on total edit count. 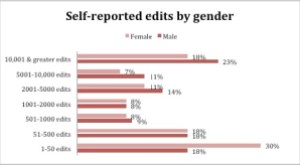 A full 91% of editors who participated in the April 2011, Editor Survey are male, while 8.5% are female. The remainder (0.5%) identified as transsexual or transgender.
Much has been written about Wikipedia’s highly skewed gender distribution, including this recent NYT story.  WMF Executive Director Sue Gardner wrote this insightful blog post on the topic as well.
The Foundation is aiming to increase the number of women participants on Wikipedia from 9,000 (as of spring 2011) to 11,700 by spring 2012. We will accomplish this partly by introducing tools and features that making editing simple for everyone – including a visual editor.  We’ve also seen great success in the participation of women via our Wikipedia in the class room initiatives.  These efforts, which are expanding around the world, tend to bring in a much representative proportion of men and women contributors.
Keep an eye out for future product updates that will enable us to work towards our strategic goals of increasing participation. We have a tall task ahead of us, and we’ll reach it even sooner if we all put our heads together. This is one smart community.
Mani Pande, Head of Global Development Research
(This is the sixth in series of blog posts where we will share insights from the April 2011 Editors Survey)