(This is the seventh installment in a series of updates from the WikiHistories summer research fellows, who will be studying the virtual community history of different Wikipedia editing communities.) 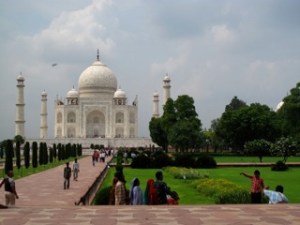 Lets just cut to the chase. Yes, the Taj Mahal is every bit as amazing as it’s supposed to be. It’s huge, it changes colors with the rays of the sun and its intricate carvings truly are breathtaking. It is worth putting up with the hassle of Agra’s touts and what may be the worst weather on the entire planet. Really, even in winter it’s pushing 90•, though at least without the sticky humidity that makes the air feel like a sponge the rest of the year. All the misery, though, doesn’t make a bit of difference when you’re in front of the gardens, surrounded by Indians dressed in their finest, everyone gasping as the Taj comes into view.
Clearly, this building is a source of pride for both humanity and the people who live in the nation in which it was built. As I wandered the grounds I was exposed to one of the most unexpected bits of local custom I would find throughout my trip. Foreigners at the Taj Mahal, who pay about 37 times more than Indians to see the site (not an exaggeration), are part of the local attraction. I was approached by dozens of people, some of whom simply handed me their children without warning, so they could take pictures. This would continue to happen at all the major historical sites, but nowhere was it more prevalent than at the Taj. I’d come halfway around the world to see their history, and that, apparently, needed to be documented.
This pride made me curious. What gems of information would I find in the Hindi Wikipedia’s entry on the Taj Mahal that weren’t present in the English Wikipedia entry? It was exciting to think that with this tool at my disposal I would learn something special, something to get me on the inside. When I excitedly looked up the entry I found … a translation of the English page. Bummer. 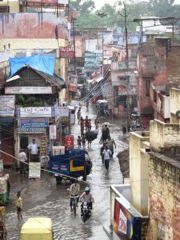 Surely the monsoon, a season so tied to the Indian collective consciousness it’s not just a season, it’s the inspiration for festivals and literature, has a page that explains all this, adding poetry and national identity to a scientifically leaning article. Negative. The page appears to be an early translation of the English page.
But perhaps I’m looking in the wrong place. Just because I, as a visitor, find these places and things to be fascinating and what I think define India, doesn’t mean that the local population feels the same. It makes sense that even though the monsoon affects India for months that a well written and lengthy article in English, that predates the Hindi Wikipedia page, would be translated rather than written from scratch. Many of the pages are, and several of the Indian Wikipedians I spoke with thought this was just fine. Marathi Wikipedian Mandar Kulkarni, whom I met with in Pune, envisions a Wikiworld in which articles are written in any language and translated to the others. Logistically, not so realistic, but in the true spirit of an open Internet in which one can write about his local community in his local language and share that information with anyone on earth in their local language.
I asked Kulkarni whether this translating of pages leaves out the Indian perspective on English and other non Indic languages pages, but he assured me that because so many Indians edit English Wikipedia, the Western viewpoint isn’t the only one being represented, a sentiment echoed by English Wikipedia editors Pradeep Mohandas and Pranav Curumsey.
For Indic language editors, writing in their local language is a way to keep that language alive and add to the long literary tradition while English language editors are more focused on the globalized world of knowledge. For many, whose local language is another Indic language, Hindi becomes a language of “us” or India, with the local language that of “me.” It’s the language that ties the country together, but not the one that necessarily does the same for neighbors. Further, the definition of “Hindi” is rather complex. Colloquial Hindi, used conversationally, has subtle variations dependent on the location from which the user hails. This can include loanwords from other Indic languages that would be used in one region but not another, or pronunciation. For me the Central India, New Delhi Hindi sounds the most familiar while the pronunciation used in Mumbai and other parts of Maharashtra make my ears work a little harder. Wikipedia doesn’t suffer too much from these differences, first, because it’s written so the pronunciation differences don’t come info play and second, because it’s written in Modern Standard Hindi, a Sanskritized Hindi that differs from that one would use when, say, picking up a tuk-tuk on the street.
It sounds confusing, but it’s really not any different from the regional dialects and different forms of English that exist throughout the English-speaking world. The difference though, is that many students aren’t literate in Hindi at the levels they are in their local language and English. They’re fluent, but Hindi education doesn’t continue throughout school with the rigor English education does. For this reason, many editors have worked on Hindi Wikipedia as a means of practicing a language they can speak effortlessly. 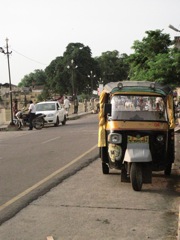 But that doesn’t mean the tuk-tuk driver, or his son or daughter is left out completely. Modern Standard Hindi doesn’t always mean lengthy literary prose. Sometimes a page is just a little stub, where translation of an English page is an option but where something more local and unique can be understood by those without a high level of education and, if they choose, can be added to.