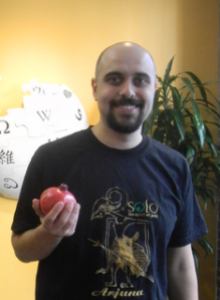 If there is one thing that makes the Localisation team special, then it is that all the team members were collaborating before they were hired by the Wikimedia Foundation. Continuing in this spirit of “never change a winning team” we are happy with the addition of Amir Aharoni as a developer to the team. We know him well, we worked well together in the past. As they say in insurance: results from the past do not predict future results but this is people and Amir is a great guy.
Thanks,
Gerard Meijssen
Internationalization / Localization outreach consultant

You are a specialist on RtL languages. How many people start writing on the right and does this not smear the ink when you move while writing to the left ?

These are actually two questions 🙂

I’ll start with the second: no, it doesn’t smear the ink. I don’t remember that it ever bothered me, and to make sure i just tested it on a piece of paper. Several times i read the claim that that was the reason the Greeks switched to writing left-to-right when they adapted the Phoenician alphabet (the older version of Hebrew) to their language, but unless I am missing something that just doesn’t seem to be a good reason.

How many people start writing on the right? It’s very hard to answer that question precisely. The biggest languages that are written right-to-left are Arabic, Urdu, Pashto, Persian, Sindhi, Kashmiri, Azeri – all written with different varieties of the Arabic alphabet; Hebrew and Yiddish, written with the Hebrew alphabet; and Mandinka and Dyula, written with the N’Ko alphabet. (Other important right-to-left languages are Syriac and Divehi, but they have relatively few speakers.)

If you sum up the number of the speakers of all these languages, you’ll arrive at about 400 million people. That’s a large number, but it’s also a very, very rough estimation. First, i didn’t count all the relevant languages; second, many people who speak these languages live in countries with low literacy rates; and finally, many people speak and write some of them as their second language.

Are there benefits writing from the right to the left ?

To say the truth – no, not really. But there is a benefit in the fact that it exists. I like the general idea of diversity. Direction of writing is just one of those things that shows that very few things in life can be taken for granted, like electricity plug shape, time zone, sexual orientation, taste in food, appearance of things to colour-blind people and, well, almost anything else. And that’s a mighty good thing.

In both Arabic and Hebrew it is possible to indicate what vowels
are used. What is the rationale for not including them per standard? 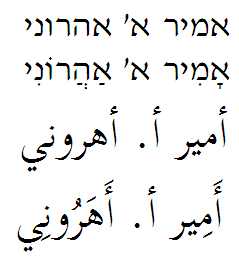 The simplest answer is “People’s customs”.

When people started writing Arabic and Hebrew, they didn’t write as much as we do today and the variety of words was not so great, so they could easily guess the needed vowels just by looking at the consonants. Our writing today is much more varied and it makes guessing the vowels harder, but the custom to omit them is still there.

I don’t know about Arabic, but there were suggestions to write Hebrew always with the vowels. The most notable suggestion to do this was made in the 1930s by Hayim Nahman Bialik, the most prominent Hebrew poet in the twentieth century and the president of the Hebrew Language Committee. Despite Bialik’s status, this proposal was never implemented, among other things because of the technical challenges in printing books with so many diacritics. And, as much as i love them, i must also admit that writing them all slows down hand writing quite considerably.

There is also the problem of the many differences between the vowel marks and the actual spoken language. Modern Hebrew has five vowel sounds, but over ten vowel marks. In Arabic it goes the other way: it has only three vowel marks, but there are more than three vowel sounds in the spoken language, and it also changes from region to region. So very often a lot of people don’t really know which vowel marks they should write even when they want to write them. This also creates an opportunity for patronizing: knowing the right grammar makes one feel smarter than others and unfortunately some people exploit it in ways that are not very constructive.

There are, however, scripts, the structure of which is quite similar to that of Arabic and Hebrew, and which do indicate all the vowels in writing. The most prominent example is Divehi, whose script is a derivative of Arabic. The scripts of India and Southeast Asia are somewhat comparable as well. My guess (and hope) is that in the near future the modern technology will make writing Arabic and Hebrew with vowels easier, if not universal.

You are a member of the Wikimedia Israel board. Do you think working for the WMF creates a conflict of interest? 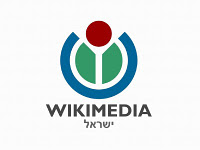 I find it hard to think about anything that can create a conflict of interest here. I discussed it with the other Board members and they couldn’t think of anything either.

If anybody does think that it is a problem, i’ll be very glad to hear about it.

Do all mobile phones sold in Israel support the Hebrew script and is combining it with the Latin script possible?

Most phones sold in Israel do support it; they also support right-to-left display and even the support for mixing Hebrew and English in one SMS message is reasonable. I don’t know whether the regulations require it or whether it’s just a matter of demand.

Some people buy themselves fancy smartphones abroad and these don’t always support the Hebrew script.

How do you cope when the Ivrit script is not supported?

Writing Hebrew in Latin transliteration is not quite common and most Israelis know at least some English, so a person who cannot write in Hebrew for any reason would probably just use English. That includes myself; using transliteration would be better in principle, but a lot of people would find it harder to read.

I should also add that when i bought my first mobile phone in the year 2000, Hebrew support in cellphones was still new and uncommon. I could pick between two models – one with Hebrew and one without. I picked the one with Hebrew, even though it cost about a $100 more and it was long before i cared about software localization as much as i do today. I did it simply because it made much more sense to write names of friends in the contact list in the Hebrew script.

You have a competency in many languages because of your study as a linguist. Can you indicate how different the five languages families are?

The differences i notice are mostly in the grammar features, some of which are very prominent in some languages and hardly existing in others. For example, in Russian, when you say that you read a book, it’s essential to say whether you finished it or only read a part of it. In Hebrew and Arabic a root of word is an abstract unpronounceable sequence of consonants and the actual words are created by inserting vowel sounds between them – this concept sounds quite crazy to speakers of European languages.

In Hebrew and Arabic there’s a strong formal distinction between verbs that describe things that a person does to oneself and things done to others. In Romance languages, like Italian and Catalan, the subjunctive mood is very prominent – it’s essential to indicate whether a person  did something or would do it; this distinction is less essential in English and it hardly exists in Hebrew. That, i’d say, is not just a matter of grammar, but also a way to think about things, but that’s a hard philosophical issue that is very hard to test. Finally, Malayalam has a word order that is logical in itself, but very unusual to somebody who speaks a European language.

You can write in at least five scripts. What script do you consider the most usable.

I suppose that the five scripts you refer to are Cyrillic, Latin, Hebrew, Arabic and Malayalam. (I can read Ethiopic, too. And, well, Greek, but that’s really not a big deal.)

The most usable is Cyrillic, of course, closely followed by Latin. It’s hard to be objective in such a case, because Russian is my native language, but i really think that it is has the best balance between simplicity, size (slightly over 30 letters), completeness and being fit for the languages it is supposed to represent. (I’ll try to balance my natural bias towards Russian by saying that the Russian orthography is actually relatively outdated and relatively harder than the orthography of other languages using Cyrillic, like Belarusian or Kyrgyz.

Latin is a close second, because in general it is very similar to Cyrillic, but its actual pronunciation and usage, as well names of letters, differ wildly between languages.

I love Hebrew, but i’ll be the first to acknowledge it’s disadvantages. Malayalam, though beautiful to behold, is rather hard to grasp, but once you get the hang of it, it does convey all the needed sounds well.

How do you want to put your stamp on the Localisation team
Except my expertise in Middle Eastern scripts, i hope to influence it in the areas of usability and testing. I don’t claim to be a usability expert, but i care very strongly about it and i want to know that the users of the software i create are actually able to use it. I also believe that all features of software localization must be thoroughly tested; it’s costly and challenging, but important and that’s why i hope to find the time to formulate localization testing policy.

One other and somewhat more personal thing that i hope to achieve through my work in this team is spreading the word about the Software Localization Paradox.

Your wife is also a dancer, did you ever come across dancewriting

I asked her and she says that it’s a cool idea, but too complicated to learn, and that in the age when phones come with reasonable video cameras it’s easier to just film the moves.
Dancing is her (very important) hobby and her main fields of work are Neuroscience and Physics. That involves a lot of math formulas and in my perspective, what she says about DanceWriting, could well be said about math.