WikiConference India 2011 started out for me in a dingy garage at the University of Mumbai – with 3 perturbed University staff, 2 stray dogs, 1 vehicle sorely in need of a paint job and a very good-spirited Jimmy Wales for company! I suppose one always knew that India was unpredictable – but even by those standards, this was a bizarre way for the festivities to commence!
The reason we were sat in the garage was because of a last minute hiccup which meant we couldn’t enter the actual conference hall for 15 minutes until after the event started. I’m pleased to report that all my companions from the garage are doing alright. Jimmy was released from my forced company and made a fine opening speech shortly after.
WikiConference2011 was the first national level meeting of the Wikimedia India community and was held between November 17th and 20th, 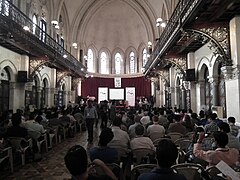 2011 in Mumbai.  The gorgeous Convocation Hall was the venue for nearly 700 people – making it one of the largest Wikimedia events ever!  I suppose it was to be expected given that this was in India – but the logistical challenges of such a large event were quite the handful – especially for a small community.
Cutely, as with all things Wikimedia, it started off with an innocuous Meta page created by a member of the Mumbai community with some placeholders for a potential Wikimania bid. Much water – and a few other fluids – subsequently flowed and the India community cajoled and organized and galvanized itself to pull off this event.  It involved – as all such events tend to – tireless work over many months by so many volunteers across the country (and indeed the world.)
My personal take on the event was that it was an encouraging start. Notwithstanding all the chaos and conflict and angst in the leadup to the event (and indeep some which spilled over at and beyond the event) – and the intermittent wi-fi and dodgy food and hip hop music at the party – I was pleased with WikiConference.

This was the first time that the India community has worked together at a national level. The value of this exposure is going to be extremely powerful to build a strong and cohesive community – and the power of this experience to build and improve the quality of projects is going to be invaluable.
The quality of the discourse was learned and informed and measured. More than 50 sessions had insights on community building, improving project quality, establishing partnerships, best practices in outreach and just good old fashioned sharing of experiences.
While there were some really interesting sessions, the hang outs outside were fantastic for folks to get to know each other, put faces to names, share ideas and to run off for a cup of sugar cane juice across the road. I’m sure these connections will grow into stronger collaboration going forward.
Personally, my high point was the penultimate session where recognition was given to notable Wikimedians from across the country. Interestingly, the majority of the folks who got this acknowledgement had not attended – but community members stepped in and each said very touching words about the recipients and gave very human stories about how they had helped on various projects.

Events such as this serve to energise communities – and I’m really inspired to see that a bunch of community members have started doing a bunch of things after Mumbai. These include proposals for specific community development work to participation in outreach sessions or improvement of articles related to India. The real measure of such events is often only apparent after the actual event.
I really hope that this event becomes an annual affair – and that India puts up a Wikimania bid at some point in time. The organizational experience from this conference (and hopefully future events) will prove to be a powerful advantage for such a bid.
I hope – some day –  to see you folks in India to attend a Wikimania.
Hisham Mundol
Consultant, India Programs