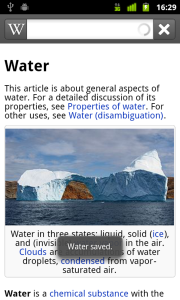 Two weeks ago, we submitted the official Wikipedia Android App into Google’s Android Market. Since then, we’ve seen an amazing reaction from our Android users. We’ve had over 500,000 installs, we’ve become #4 in top free books and reference, and we held the #1 trending spot in the whole Android Market last week. Those stats don’t even reflect how great we’ve been doing internationally. Thank you to our users for supporting us.
We wanted to do this blog post sooner, but we had a busy news week helping to protect the Internet and releasing two important updates to fix GPS and performance related issues. Now, we’re excited to talk about it.

Our Android app marks a really important turning point for the Wikimedia mobile projects and the open web in general. Instead of developing a native application as we had done previously with our iOS Wikipedia app, we opted to simplify our development efforts by using PhoneGap. Fully embracing HTML5, CSS3, & Javascript commits us to the open Web technologies of the future. Rather than diving into proprietary frameworks and SDKs, our application has been built on the same foundation as the open mobile web. And not only does this allow us to prepare for the future, it also accelerates our ability to develop across numerous platforms.
Within a short amount of time we’ve already developed a testing version of our iOS app with PhoneGap and we’ve established our first complete community port to the BlackBerry PlayBook. This demonstrates the power of using open tools and communities to improve the Internet as a whole and it is a critical component to our long term goals.
But there is a lot more to do. We’ve received excellent feedback from our reviewers and we’ve started to incorporate it into our roadmap. Future versions of all of our apps will include a lot of what we’ve heard from our users, but we need help to get there. Our code is all open source and its easy to get involved. Fork our code, reach millions, and help educate the world.

The App and our Global Mission

Given Android’s significant smartphone market share, having an Official App may be a “must” these days, but there are additional reasons that this release is important for us.  First, the app is truly international. Unlike our iOS app, which was only localized into four languages, our Android app already has complete localization for 25 languages, nearly-complete localization for over 50 languages, and it can be translated to over 250 languages through translatewiki.
As importantly, it opens up new distribution opportunities for people to discover Wikipedia. As we develop mobile partnerships throughout the Global South, (see our recent announcement with Orange), we hope to distribute this app through operators’ local app stores in addition to Android Market. This not only broadens Wikipedia’s reach, it also gives our operator partners a free, unique, and locally relevant offering for their customers, strengthening the overall impact of these partnerships.
Finally, the rise in low-cost Android smartphones is making the web more broadly accessible to people who may not have had Internet access previously. This is in alignment with our mobile mission to reduce barriers to accessing free knowledge.
We’re excited to celebrate this release, both as a development milestone and a mission-aligned achievement. And we are thrilled to get the app into the hands of more people around the world. Now, let’s make some noise.
Tomasz Finc, Director of Mobile and Special Projects
Amit Kapoor, Senior Manager, Mobile Partnerships