When good people get together in a friendly, well organised setting like this weekend in Pune, many great things happen. Several MediaWiki developers had come to provide the many people new to MediaWiki with their expertise and guide people into its inner workings.
Many people worked on Wikimedia mobile and the SmartPhone software, others worked on MediaWiki and its extensions. Bugs got fixed and functionality got extended.
One of the surprises was two people working on the localisation for the Mongolian language. The inclusion of a web font that will support the Dzonka language is another. 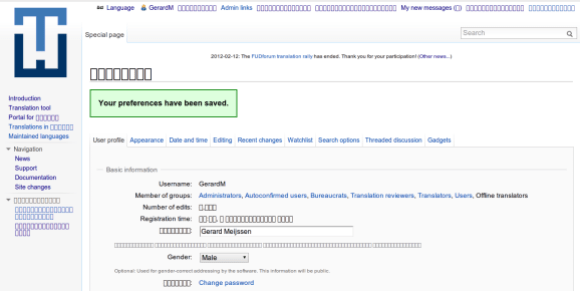 Dzongkha is the official language of Bhutan and according to Ethnologue, the script used is either Tibetan script, Uchen style or the Tibetan script, Umed style. These scripts and styles are also used for the Tibetan language, it is not only Dzongkha that stands to benefit.
One of the highlights of the work on the SmartPhone app is support for scripts that are written from right to left, this is now “beta” functionality. The result of more people looking at the code was that several bugs received the attention needed to make them go away. Scrolling was one area that got attention; this results in a smoother user experience.
New input methods have been created for Punjabi transliteration and for an Gujarati input method to be included in Narayam. The continued collaboration with RedHat engineers ensures that our work benefits both MediaWiki and RedHat/Fedora. We do realise that there is still a lot to do and it is not only documentation. Additional work was done on the “visual on-screen keyboard” that was started at the previous hackathon in Pune, it still needs more testing and design work.
Thanks,
Gerard Meijssen
Internationalization / Localization outreach consultant