Joaquim Alves Gaspar (User: Alvesgaspar) captured this beautiful shot of the Lys River on a recent trip to Ghent, the capital of the East Flanders province in Belgium. It may not be immediately obvious just from looking at the image, but today’s Commons Picture of the Day was actually quite a tricky shot to get.
The sky was overcast that day, which presented many challenges for Alves Gaspar. As anyone who has ever tried to photograph a scene on an overcast day will know, it is difficult to obtain a shot like this because the sky is typically reproduced as a uniform white, while the rest of the scene is covered in shadow. Alves Gaspar’s solution to this problem was to underexpose the image “so that the sky doesn’t appear ‘blown,’” and then digitally adjust the brightness and saturation of the other parts of the image to bring back the details and color.
In addition, he said, “one detail that few will realize is that this image is a panorama composed of seven different shots, which were later ‘stitched’ with the help of special software.” Alves Gaspar believes that the final result “reproduces well the mood of the place, with the calm waters of the canal, the colorful buildings and the soft lighting,” conveying “a mood probably close to the one experienced and expressed by the Flemish painters of the past.”
Alves Gaspar has been contributing to Commons since 2006, with more than 1,500 photos uploaded, and approximately 80 Featured Pictures. He attributes much of his knowledge about digital techniques and macrophotography to the image forums on Commons, especially in Featured Picture Candidates, “while reviewing the creations or being reviewed by talented users.” 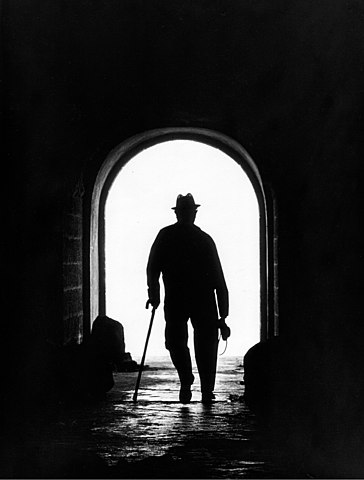 Even before digital photography, Alves Gaspar had been pursuing photography as a hobby for a long time. He recalls that as a young man, he had his own black-and-white photography lab, and he took pictures using “one of those Rolleiflex-type cameras with twin lenses, borrowed from someone–they were quite expensive.” He took one of his favorite photographs during that time, a silhouette of an old man with a cane in one hand and a camera in the other, walking through a tunnel. “The challenge for anyone looking at this photo is to figure out whether he was approaching or walking away from me!”
He primarily enjoys photographing people, although he finds that to be the most difficult subject, and he also enjoys capturing nature themes and urban scenes. “Like in other forms of art, I consider that the interpretation of reality is an important component of photography, through which we seek beauty, sometimes in unsuspected places and forms, and show it to the others,” he said, citing macrophotography as an example, “where the details of an insect or of a humble flower, so often looking as if coming from an alien world, continue to amaze whoever has the chance of observing them through a macro [perspective].”
(View more of Alves Gaspar’s featured pictures)
Elaine Mao, Communications Intern