The historic Landsort Lighthouse, depicted in today’s Picture of the Day on Wikimedia Commons, is the southernmost point of the Stockholm archipelago in Sweden. The lighthouse is located on the island of Öja, which is isolated with no road access. Commons contributor Arild Vågen (User:ArildV), who lives in Stockholm, took a boat to the island and spent the day there taking photos.
In the afternoon, as Vågen was preparing to leave the island, he decided to take one last walk while waiting for his boat home. Along with a friend of his who volunteers at the Landsort Bird Observatory, Vågen explored the area around the lighthouse, climbing around the rocks to get this picture. By then, the weather had taken a turn for the worse–the temperature dropped and the sky became cloudy, but Vågen didn’t mind. “I like the light and the weather here,” he said.  “It’s more exciting and interesting than a sunny picture, and it might remind us that life on the islands has been tough for long periods and that the islands are exposed to rough weather.” Vågen also pointed out the naval guns visible in the shot, “which reminds us of the Baltic Sea’s dramatic history.” The island has a long history as a military base, he said, and it only became completely open to visitors after the Cold War.
For his trip to Öja that day, Vågen borrowed a camera and lens from Wikimedia Sverige, which offers a technology pool which any of its members can borrow photographic equipment from. Since 2012, Vågen has also been a board member of the Swedish Wikimedia chapter. 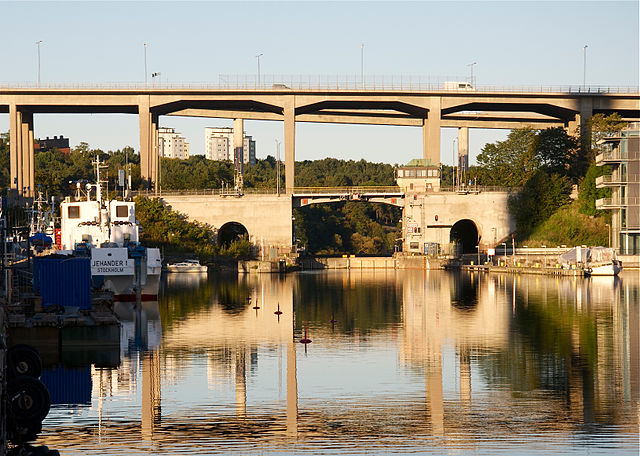 He first got involved with the Wikimedia projects in 2008, when he started editing Wikipedia. He mostly wrote articles about Stockholm architecture and history, and he initially only took pictures if they were directly required by articles on Wikipedia.
However, he gradually started making more contributions to Wikimedia Commons. “In the last year, I have also documented areas that are changing, many old port and industrial areas turned into residential and commercial areas. Both now and in future it is important to have pictures of how the area looked before,” said Vågen. “And there is often an interesting story to document with the camera.” One example of such an area is the island of Kvarnholmen, Nacka, which Vågen “documented for Commons before the old environment is lost.”
Vågen primarily enjoys shooting buildings and landscapes, especially the Swedish mountains and the Stockholm archipelago, but also urban landscapes. He was a project manager for Wiki Loves Monuments 2011 in Sweden. He has always been interested in photography, but only in recent years has he pursued it more seriously. The Wikimedia Commons community has been a valuable learning resource, he said.
“I started contributing to Wikipedia and Commons because I share the vision: ‘Imagine a world in which every single person on the planet is given free access to the sum of all human knowledge.’ That’s what we’re doing,” he said. “And it’s great fun to contribute!”
(View more of Vågen’s images)
Elaine Mao, Communications Intern