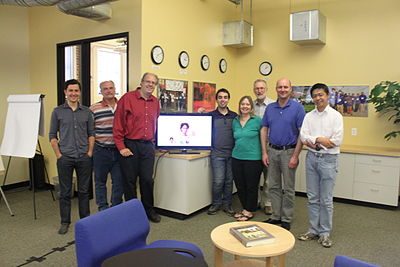 On June 9-10, the advisory group for the formation of the future Funds Dissemination Committee (FDC) met at the Foundation’s offices in San Francisco. Community volunteers, Wikimedia Trustees, chapter representatives, Foundation staff and members of the Bridgespan Group discussed how the FDC will guide the decisions about the distribution of money (over 10 million US dollars in 2012-13) among the Foundation, chapters and other groups. Based on the resulting recommendations, the Board of Trustees has since approved the charter and initial operation of the FDC. Wikimedians who wish to serve on the FDC are invited to nominate themselves.

Logo of the Visual Editor project

A new prototype of the “visual editor” for Wikimedia projects was launched, the first release that can create and edit pages. It will enable users to contribute without having to learn complicated wikitext syntax.

The Teahouse, where new Wikipedia editors can receive support from experienced community members, concluded its three month pilot phase on the English Wikipedia, publishing a report and metrics. 568 volunteers participated in the pilot. In a survey, 70% said that they were satisfied with their Teahouse experience, while only 5% were not satisfied. New editors who are invited to the Teahouse made many more edits afterwards than those who do not receive an invitation. 28 percent of Teahouse participants are women, compared to 9 percent of editors on Wikipedia in general.

A panoramic view of the Berlin Hackathon

Over 100 participants from 30 countries came to Berlin for the Berlin Hackathon, co-organized by Wikimedia Deutschland and the Foundation. They included MediaWiki developers, Toolserver users, systems administrators, bot writers and maintainers, Gadget creators, and other Wikimedia technologists. The community also learned more about the Wikidata and RENDER projects.

18.1 billion (+0.2% compared with May; +22.7% compared with the previous year)
(Server log data, all Wikimedia Foundation projects including mobile access)

Report Card (integrating various statistical data and trends about WMF projects) for May 2012:

(Financial information is only available through May 2012 at the time of this report.)

A new initiative called “Afripedia” will make Wikipedia available in areas of West Africa where no good Internet connection is available. The project will install offline (Kiwix) versions of Wikipedia on flash drives. These are plugged into small, energy-efficient computers without screens or keyboards (plug computers) that are connected to a local, offline WiFi network. Anybody who receives the WiFi signal will be able to access the content. The project is a partnership of Wikimédia France with the Agence universitaire de la Francophonie (Association of Universities of the Francophonie – AUF) and the Institut français (IF). It will start in about 20 universities in 15 countries in West Africa.

On the first weekend of June, the Second Ibero-American Wikimedia Summit (also known as “Iberoconf”) took place in Santiago de Chile. It was attended by representatives of the Wikimedia chapters of Argentina, Bolivia, Brazil, Chile, Colombia, Italy, Mexico, Portugal, Spain, Uruguay and Venezuela, and also by guests from Panama, Peru, the Wikimedia Foundation and Wikimedia Germany.

“Wikipedia Academy” on research about Wikipedia

At the end of June, the “Wikipedia Academy 2012” brought together academic researchers and Wikimedians in Berlin, organized by Wikimedia Germany. Both research about Wikipedia in particular and about free knowledge in general was presented at the conference. Various papers and videos are available online.

The monthly Wikimedia Foundation metrics and activities meeting on July 5, 2012 covered the 2012-13 Annual Plan instead of focusing on the month of June as usual. The video recording will be uploaded to Commons around the time of the publication of the Annual Plan.