Within the Wikimedia Foundation’s Editor Growth and Contribution Program, the first phase of a new contribution portal project was piloted on the Arabic Wikipedia over four weeks between 18th June and 17th July 2012. According to a preliminary analysis, it appears to have a positive effect on the ratio of new editors who make contributions to Wikipedia.
The key idea of this first phase was to create a page with a simple design in order to test the overall concept, while monitoring the ability of new users to perform various simple Wikipedia tasks relying merely on reading visualized tutorial pages. The portal was named Bawabatu Almusharakah (Arabic : بوابة المشاركة), which is literally translated as “Contribution Portal” or “The Participation Gateway”. It is meant to evoke a space which provides help as well as an being an entrance point for newcomers to Wikipedia, enabling them to contribute to its contents and share the knowledge they possess, while collaborating and communicating with existing Wikipedia community members. 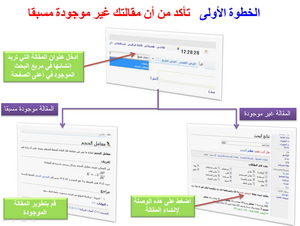 The design of this phase of the contribution portal consisted simply of a main portal page leading to visual help tutorials. The main page of the portal starts with the question “What would you like to do in Wikipedia?”, followed by six buttons each listing a possible answer (create a new article, user page or redirect, fix a typo, add a reference, or post a user talk page message), and linking to a corresponding step-by-step tutorial page. For the first test of the concept, we tried to keep the page design as simple as possible to avoid any visual distraction. We also aimed to use as little text as possible in order to quickly guide visitors to their target page without requiring much time for reading.
To invite users to the portal, we ran banners using the local site notice on Arabic Wikipedia. During the first week of the pilot, the banners targeted only logged-in users. This brought a small number of visitors to the portal every day. After the first week, the banners were switched to target all readers, logged-in or not, which significantly boosted the number of visitors.


In order to understand whether viewing the portal leads to increased editing by new users, we adapted a new metric called “Contribution Ratio.” It is calculated as the proportion of the number of contributors (registered users with at least one edit so far) to the number of new registered users. The graph on the right shows the value of the contribution ratio extracted on a daily basis starting from 2007 on the Arabic Wikipedia. It shows that the contribution ratio was roughly in the range between 4% ~ 8% over the past 4 years, which means that only 4 ~ 8 users out of each 100 new accounts made at least one edit to the Arabic Wikipedia.

The graph indicates that running banners inviting site viewers to contribute to Wikipedia has an impact on the contribution ratio, as the average contribution ratio increased from 4.5 % during the Control 1 period to 5.1% during the Control 2. However, by landing the banners on the contribution portal with more appealing visualized help pages, the contribution ratio increased even further to 5.7%. This appears to be the combined effect of inviting users to contribute and also providing them with an easy-to-use method of learning how to contribute.
We are working now on creating a new design for the next phase of the Contribution Portal, which we are planning to launch later in August, to determine whether improving the overall look and feel of the portal has any impact on its use. The next phase aims to incorporate a section for enhancing communication between new users and the existing community member, using the concept of the Teahouse project.
The outcomes of this pilot project demonstrate the high effect of running banners using the local site notice as a powerful tool for attracting new editors, and that providing new users with simple, easy to understand, visual tutorials can encourage more of them to contribute to Wikipedia. We will keep you posted as the project moves forward, and look forward to see new users learning how to edit Wikipedia at the gate.
Haitham Shammaa, Contribution Research Manager