Librarians during a Wikipedia workshop

150 librarians from all over Catalonia have been trained about Wikipedia to spread it among library users.

Catalonia is an autonomous community of Spain, with its own language, culture and history. Its capital and largest city is Barcelona.

During the months of June and July 2012, 150 librarians from all over Catalonia have received training about Wikipedia so they can later inform their library users. Meanwhile, the Catalan Ministry of Culture has reprinted 1,500 copies of the Welcome to Wikipedia guide for distribution through the network of libraries. 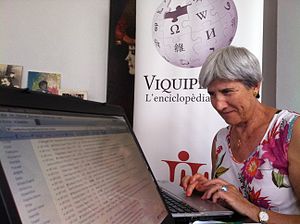 Wikipedia is hugely popular, but how it works internally is a mystery for many. Amical Viquipèdia chose to demystify the inner workings of Wikipedia by organizing Wikipedia workshops for librarians in five of the main cities of Catalonia. During these workshops, librarians learned about the wiki interface and the benefits of open knowledge. They also became familiar with ongoing GLAM-Wiki projects (collaborations between the cultural sector and the Wikimedia movement) from around the world, and were taught how to edit Wikipedia. The librarians now not only understand how to contribute to Wikipedia, but also how to use it as a tool for engaging their users and to reassess their collections and local funds. These newly-trained librarians will now return to their libraries and encourage users to expand their experience by contributing knowledge acquired through their research into Wikipedia.

One of the pioneering experiments within this collaboration has been at the local library of Palafrugell, a municipality on the Costa Brava. During July and August, a volunteer has been serving as a Wikipedian in Residence for the town. The Wikipedian in Residence is based at the local Library of Palafrugell, in collaboration with other local cultural centers. The Catalan Ministry of Culture wants to improve the role of local Wikipedians in Residence at libraries in order to improve local history and heritage presence in Wikipedia and its sister projects. This will also serve to offer a network of local Wiki-contact points across Catalonia.

The project also aims to facilitate increased access to existing bibliographic resources and to the public libraries’ catalog system, as well as to upload existing public domain texts and pictures to Wikimedia Commons. There is also a plan for 2013 to use Wikisource, the multilingual online digital library of free content textual sources (such as Greek classics, 19th century Catalan literature, etc.), as one of the tools of the government’s National Reading Promotion Plan. The editors of this project will scan, transcribe and validate free content sources to make them available online for free.

Lori Phillips, US Cultural Partnerships Coordinator for the Wikimedia Foundation, and longtime GLAM-Wiki volunteer, stated, “This cross-institutional collaboration among Catalan public libraries is unprecedented in its breadth of outreach to cultural professionals and in the depth of engagement and access it will provide to the public. Barcelona cultural organizations have been leaders in the GLAM-Wiki initiative since 2010, and this bold project continues that tradition, illustrating the impact that partnerships between Wikimedia and cultural institutions can truly have.”