Video of the monthly Wikimedia Foundation metrics and activities meeting covering the month of July (August 2, 2012)

469.64 million (-4.62% compared with May; +17.60% compared with the previous year)
(comScore data for all Wikimedia Foundation projects; comScore will release July data later in August)

(Financial information is only available for June 30, 2012 at the time of this report.)

Foundation staff report on their work at Wikimania 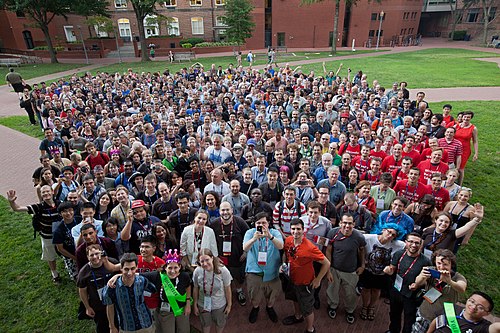 From July 12 to July 14, Wikimedians from around the world came together in Washington DC for this year’s annual Wikimania conference, organized by Wikimedia District of Columbia (see also the this month’s movement highlights). Among them were many Wikimedia Foundation staff, fellows and contractors.

Beyond these, Wikimedia Foundation staff, fellows and contractors also participated in various other panels.

The fundraising team recorded over 100 on-camera interviews with Wikimedia editors, programmers and volunteers from all over the world. Interviews are inspiring new editor appeals (and a short video about Wikipedia), which we will showcase during the annual fundraiser.

A detailed report of the Tech Department’s activities for July 2012 can be found at:

Major news in July include:

This year’s pre-Wikimania Hackathon was special in that it had a full track for newcomers, going beyond tutorials. The Hackathon was a collaboration with OpenHatch, an open-source teaching non-profit. The new efforts included appropriate first-time tasks to orient newcomers into more advanced Wikipedia editing and tech contribution, a laptop setup guide that steps attendees through the process of configuring development environments, and constant in-person assistance to help people past problems they encountered. While at the event, we saw many people learning more about templates, editing Wikipedia, and using and modifying bots to improve the encyclopedia and media on it. At least 65 people signed in, with surely more in attendance. During the main Wikimania conference, a number of volunteer and staff gave talks and led discussions about technology-related topics.

The team mostly worked behind the scenes in July. Notably, we successfully integrated and tested the upgraded Varnish software (with persistent cache patch) on some of our mobile caching servers. They are working very well and the plan is to roll it widely in the coming weeks.

Migration to Swift is progressing to the final stages now that the performance bottleneck issue identified in June has been resolved. MediaWiki is now operating fully using Swift as the primary object store for thumbnails (the legacy NFS system is relegated to a secondary fail-over backup). The ‘originals’ (uploaded images and multimedia contents) have been copied over to Swift as well, setting the stage to migrate away from the NFS filer next month.

The VisualEditor (VE) team presented their work at Wikimania and received a good deal of feedback from the community. The team created a rough plan for the next three months’ work. The early version of VE on mediawiki.org was updated twice, fixing a number of bugs and noticeably including the addition of support for nested lists.

The team deployed Article Feedback on 10% of the English Encyclopedia. This month, we developed final features for this tool, including the article feedback page, the central feedback page, and the final feedback form (scroll to bottom of page). To guide users of this tool, we also published a new video tour, a walkthrough tutorial and various help pages. We are aiming for a full release to 100% of English Wikipedia by October 2012 — with other wiki projects starting later this year.

The team deployed an updated version of the new Page Curation product (formerly called Page Triage) on the English Wikipedia. It includes two main features: 1) the New Pages Feed, a dynamic list of new pages for review by community patrollers; and 2) the Curation Toolbar, an optional panel on article pages, which enables editors to get page info, mark a page as reviewed, tag it, mark it for deletion, send WikiLove to page creators — or jump to the next page on the list. We plan to pre-release this feature on the English Wikipedia in mid-August — with a full release in September 2012.

The team continued to work on the Universal Language Selector and set up a prototype to test it. Development was completed on Translation memory and CLDR plurals support and code review is pending. User experience testing of the Translate extension is in progress to Translate UX enhancements. The WebFonts and Narayam extensions were deployed on Bengali Wikisource and Punjabi Wikipedia. Development started on Project Milkshake.

The Timestamp Position Modification experiment was completed, and initial analysis shows that adding the timestamp on articles increases clicks on the History tab. Development started to deliver post-edit feedback messages; this experiment includes a proof-of-concept dry run of a new editor bucketing strategy for delivering experimental treatments that was deployed in advance of the full experiment. The team configured a test environment on Labs, to be used for UI and functional requirements validation by the team. The Wikimania conference was an opportunity to interact with editors from the English Wikipedia, and to define a new experiment related to cleanup templates. 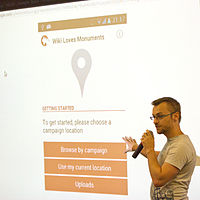 Significant progress made at the Wikimania Hackathon in Washington DC and elsewhere. The development team of Jon, Brion, Yuvi, Max, Arthur improved the robustness of photo uploads, sped up monument discovery, and polished the app extensively. We held a showcase to demo our app to the WLM community and have released a first beta for Android.

We added three new projects and one new domain to be mobile default. Wikiquote, Wikibooks, Wikiversity, and *.wikimedia.org are now equipped to better server our mobile users. The development team is eager to hear back from our community about what they would like to see from their projects on mobile. Our last project to migrate will be commons.

We’re in the process of evaluating Gerrit and its alternatives as a code review tool. We upgraded our Gerrit instance to 2.4, which provided many incremental fixes and small features (e.g. the “rebase” button), and migrated the Gerrit database to our Ashburn datacenter, which resulted in a big performance boost.

We’ve added a debug console to test code snippets. We believe we’re ready to deploy Lua to the WIkimedia cluster, starting with test2 in August, followed by mediawiki.org. We plan to let Lua incubate on mediawiki.org while we test the performance characteristics with key templates, and work out a deployment plan for larger wikis that includes community involvement.

Secured a $100,000 3-year grant from the Charina Endowment Fund.
Revamped the categories in Civi to better capture the data we need.
Completed our annual report to the Sloan Foundation.

Wikimania! – The team recorded over 100 on-camera interviews with Wikimedia editors, programmers and volunteers from all over the world. Interviews are inspiring new editor appeals (and a short video about Wikipedia), which we will showcase during the annual fundraiser.
Photographed the Wikimedia servers that the Fundraising team is always talking about in banners.

Worked closely with Finance and Legal for reviewing/approving new payment service providers.
Weekly testing continued: http://meta.wikimedia.org/wiki/Fundraising_2012/We_Need_A_Breakthrough
Prepared for a fundraising test on Spanish Wikipedia to take place the week of August 21. This will be the first of several tests that will go up prior to the fundraiser kicking off. The goal is to localize the campaign to the best of our ability, test our infrastructure, and identify any kinks in the overall operation.
Hired Matt Walker, fundraising engineer. The fundraising tech team is fully staffed and making much progress on implementing new features for the 2012 fundraiser.
Joseph Seddon started as the Fundraising Translation Coordinator to build up and support our volunteer translators so we can show our fundraising messages and supporting materials (emails, info pages, etc) to our users in their own language.

Experiments continue on the Arabic Wikipedia Contribution Portal. Analysis of the initial pilot phase of the project is demonstrating early proof of concept – running banners that invite readers to learn how to contribute and providing simple learning tools for this purpose is encouraging a higher proportion of new accounts to edit.

The focus for the Communications team in July was Wikimania 2012 in Washington, DC. Prior to the event, we supported the Wikimedia DC organizing team as they prepared for the Wikimania press conference with Jimmy Wales, Sue Gardner, representatives of the Wikimedia Foundation Board of Trustees and plenary speaker Mary Gardiner. More than 40 media outlets pre-registered or showed up directly at the event at George Washington University’s campus, interviewing a number of participants and speakers (see the wonderful BBC editor profile story linked below).

The Communications team also organized a day of media interviews for Jimmy Wales the Tuesday before Wikimania. It included roundtable discussions with the Washington Post editors, columnists and reporters, a similar roundtable and video interview with Politico, and an excellent video piece with PBS Newshour (see below).

The Wikimedia Shop (http://shop.wikimedia.org) debuted to a positive reception at Wikimania, and to the world via a blog post). James Alexander introduced the shop to Wikimedians in person and gave out all the official Wikimania t-shirts to the more than 1400 participants at the conference. Further, James solicited significant feedback from the volunteer community for further merchandise, including a number of new designs sketched out on the spot. As the online platform for the shop expands, we’ll continue to make the shop more accessible and cost-effective for those outside of North America.

The focus for Communications continues to be increased production on the Wikimedia blog, with more participation from our contributor community and more articles in non-English languages.

In July, we announced the new Wikimedia Foundation Board of Trustees and Elected Officers for 2012-2013.

A central theme at Wikimania 2012 was the need to increase the total active editors across Wikimedia projects. Significant press attention followed several discussions at the event, including Jimmy’s opening plenary and Sue’s Saturday plenary.

The need to promote new administrators on English Wikipedia (July 2012)

The press wrote a number of articles based on a presentation by Andrew Lih during Wikimania, which chronicled the decline in the rate of new admins promoted on English Wikipedia over time.

Increasing the number or women editors on Wikipedia

The Wikipedia Gender Gap was a prominent theme at Wikimania and in the press surrounding Wikimania. Jimmy mentioned a controversy around the notability of Kate Middleton’s wedding dress, which set off a media flurry.

For lots of detailed coverage and news summaries, see the community-edited newsletter “Wikipedia Signpost” for July 2012:

Twenty-nine blog posts in total for July 2012. A surge of new posts from the Wikipedia Education Program team, including several important posts in WMF priority regions, such as Arabic-language countries.

HR is pleased to now have a full-time internal recruiter, Sangeeta Prashar, who can build our strength in that area. We will focus on engineering recruiting and improving our candidate experience.

We are pleased to welcome Lynette Logan as our new Director of Administration.

We have been working on several projects this month: