Students in the Wikipedia Education Program in the United States and Canada improved article quality on the English Wikipedia by an average of 88 percent during Spring 2012, according to new research conducted by Luis Campos, an external data analyst. In the Wikipedia Education Program, professors assign their students to improve course-related articles, with support from Wikipedia Ambassadors who help students learn the basics of Wikipedia editing.
Experienced Wikipedia editors evaluated a random sample of articles students worked on as part of the Wikipedia Education Program in the United States and Canada in Spring 2012. The metric evaluators used, with assessment areas for comprehensiveness, sourcing, neutrality, readability, formatting, and illustrations, on a 26-point scale, is based on the Wikipedia 1.0 metric used across English Wikipedia. Evaluators provided two ratings, one for the article quality immediately prior to the first edit the student made, and one after the class had wrapped up their work; reviewers also used the same metric to evaluate articles that students created from scratch. A total of 124 articles formed the sample. Altogether (counting both new and pre-existing articles), articles improved on average 6.5 points, from 7.4 to 13.98 points on the 26-point scale. The graph below shows the quality distribution of articles before students worked on them (in blue), and the quality distributions of articles after students worked on them (in red).


The 124-article sample included 82 existing articles and 42 new articles created by students. Existing articles improved 2.94 points on average, from 11.26 to 14.2, with the most improved article improving by 10.25 points. An example of such an article that a student improved is the article on vocabulary development. You can see the versions prior to students’ first edits and the status it was after the class finished. The graph below shows the distribution of pre-existing articles before (blue) and after (red) student work.
New articles had an average score of 13.55. You can see a sample of what a student contributed to a new article by reading Temptation, a Václav Havel play. The graph below shows the distribution of quality of new articles students created through the Wikipedia Education Program. 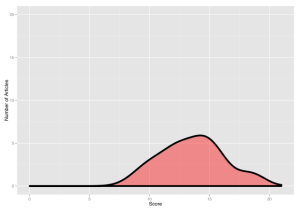