Only days after Wiki Loves Monuments 2012 wrapped up this September, organizers got the word that Guinness World Records had officially certified last year’s 2011 contest as the largest photo competition in the world.
Wiki Loves Monuments 2011 attracted over 5,000 participants from 18 countries, who uploaded 168,208 photos under a free license for use on Wikipedia and other freely licensed projects. The 2011 contest surpassed the previous Guinness record of just over 120,000 photos.
“The Guinness World Record for largest photography competition is a recognition of the effort of the hundreds of volunteers that have helped pull off this contest in the past years” said Lodewijk Gelauff, one of the international coordinators of Wiki Loves Monuments.
Of course, those of you following the current contest know that Wiki Loves Monuments 2012 was an even bigger success. It was expanded to 35 countries, including first-time participants such as the United States, Argentina, South Africa and India. While the 2012 competition is still ongoing in Israel, and the results are not yet final, it’s safe to say the Wikimedia community is about to break its own new world record.
More than 15,000 photographers have already submitted more than 350,000 photos in 2012, doubling the total certified by Guinness World Records for 2011. The most photos came from Poland, with over 50,000 uploads by nearly 700 participants. India had the greatest number of participants, with over 2,200 photographers submitting more than 16,000 photos. And amazingly, Catalan user Pere prlpz uploaded nearly 9,000 photos individually!
For many of the organizers of the contest, the most gratifying number is the following: of the uploaders, more than 11,000 had never contributed to Wikimedia projects before. 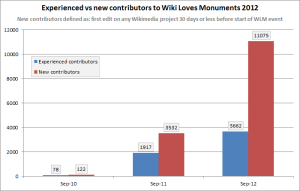 At the Wikimedia Foundation, we spend a lot of effort bringing new contributors to the Wikimedia projects and keeping active contributors happy with their experience, so we’re very excited that a contest like Wiki Loves Monuments — which was started by volunteers in the Netherlands in 2010 and was organized by volunteers in every participating country — can prove itself such a demonstrable success.

Best of all, participants discovered that sharing photos is an easy way to help Wikipedia expand its base of free knowledge. “Thanks to the contest thousands of people have made their first steps towards contributing to Wikipedia by submitting a photo,” Gelauff said. “I find it heartwarming that so many people wanted to share their photos freely with the whole world.”
To coincide with the 2012 contest, the Wikimedia Foundation developed a Wiki Loves Monuments app, which enabled Wikipedians for the first time to officially upload photos to Wikipedia projects from a mobile device. There were over 3,000 uploads via mobile worldwide.
Photos uploaded this September as part of the contest are being judged first at the national level, where juries in every country will select their favorite 10 photos based on photographic merit and encyclopedic value. The winning photos from national contests are then considered by an international jury in November, which will announce the top-12 photos and the overall best picture winner in early December. The grand prize winner will be flown to Hong Kong for a photo tour as part of the Wikimania 2013 conference.
Of course, this being Wikimedia, organizers are already planning Wiki Loves Monuments 2013, which they hope will expand to more countries to bring in many more contributors. If you would like to see your country participate next year, go to the international planning site on Wikimedia Commons and take part.
Check back here in early December to find out the results of this year’s contest. For now, feel free to upload your photos to Commons and contribute to Wikipedia’s growing image database year round.
Matthew Roth, Global Communications Manager