The Language Engineering team at the Wikimedia Foundation works on a set of tasks every two weeks. This post is about the team’s accomplishment over the past two weeks.

Have you ever sat at a computer in a foreign country, and wondered how you were going to enter text in your language using a keyboard with a different alphabet?

“Input methods” are interfaces that allow users to enter text in a script different from the one used on their keyboard. On some Wikipedia versions (like wikis in Indic languages), such a tool has been available through the Narayam extension.

As part of Project Milkshake, this feature has recently been exported to a JavaScript library (a bundle of code, called jquery.ime) so that it could be reused by other web developers.

Another language-related tool, the Universal Language Selector (ULS), allows readers of Wikipedia and its sister sites to easily pick the language of their choice for the website’s interface.

Over the last two weeks, we’ve integrated the input methods’ functionality directly into the Universal Language Selector: it now comes with a large set of input tools that users can use to input text in non-latin languages. 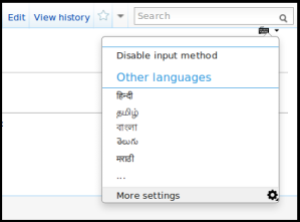 The integration of the two tools makes the interface more consistent and usable when it comes to choosing languages in which to read (“display”) and to write (“input”) on the site: both settings are located in the same dialog of the Universal Language Selector. 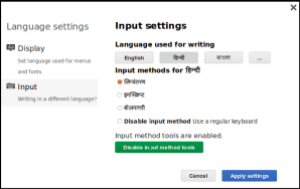 Other language engineering news in brief: