Creating an organization from scratch is a hard task. Creating one capable of fulfilling the requirements of a Wikimedia affiliate is even harder. One of the Affiliations Committee’s tasks is to make this process an easier one!

It seems like a long time since Wikimedia Deutschland–the first Wikimedia chapter–was founded on June 13, 2004 in Berlin. Since then, 39 chapters (and counting!) have come to life around the world. These groups of volunteers work to support the Wikimedia projects and attract new contributors. By collecting and developing free knowledge under free licenses and disseminating it globally, these chapters engage and empower people in communities around the world. In order to support them and help with “chapter coordination,” a Chapters Committee was created in 2006 by a resolution of the Board of Trustees of the Wikimedia Foundation.
In 2012, following a community discussion and a resulting Board of Trustees’ resolution, the scope of the Committee was expanded to include thematic organisations and user groups. In accordance with the resolution, the Committee drafted its charter, which was officially approved by the Board in August, thus finalizing the transition to the new Affiliations Committee.
The Affiliations Committee is responsible for making recommendations to the Board of Trustees on the recognition, approval and existence of Wikimedia movement affiliates. The Committee also helps Wikimedians from around the world to organize into chapters, thematic organisations or user groups, and to gain official recognition from the Wikimedia Foundation. The Affiliations Committee can guide you through the founding process of your organization by helping you prepare bylaws; by answering questions about what the Foundation expects from an affiliate; by providing help and advice on solving common technical, trademark, administrative and community-building issues; and — if appropriate — by approving limited financial support for starting up your activities (covering costs of registration, costs of running first projects, etc.). 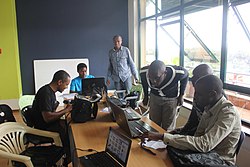 Wikimedians are social and like to come together to do amazing things!

What are the main differences between the different models of groups? While chapters support and promote the Wikimedia projects in a specified geographical region or country (for example, Wikimedia Argentina), thematic organisations will support and promote the Wikimedia projects in a specified thematic field or focus area (for example, Wikipedia Astrophysics Editors). User groups, on the other hand, will be loose associations of local volunteers, highly variable, but still within the overall mission of supporting and promoting the Wikimedia projects (for example, a WikiProject Stroopwaffle).
In this way, the Wikimedia movement is making it easier for volunteers to come together offline in whichever model of affiliation is most applicable to their needs. Similarly, this will help more individuals and groups gain a series of advantages, such as recognition as representatives of the movement, the possible use of the Wikimedia trademarks to promote the organization’s projects and events, and the possibility of securing grants.
Guides for the creation of thematic organisations and for the creation of user groups are now available on Meta for people who are interested in pursuing those options. A similar chapter creation guide can also be found there. The enthusiastic volunteers at the Affiliations Committee will do their best to help you throughout the process. Heeding these guides and following the existing requirements and guidelines will ensure you have a smooth path towards the creation of your desired affiliate model! Start organising now, gather your friends and contact us at affcom