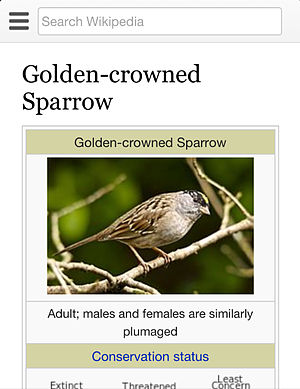 The design changes to the Wikipedia mobile site include new navigation and updated typography.

The mobile gateway to Wikipedia was updated with several features that had earlier been tested on the mobile beta site. The new navigation system aims to make mobile features and settings easier to discover. In the coming months, the mobile team will work on adding possibilities to contribute on mobile devices. In the previous month, the Wiki Loves Monuments app had already introduced a mobile photo upload function, as the first such possibility. For readers, the new design offers fonts that make the content easier to read.

The nine members of the new volunteer-run Funds Dissemination Committee (FDC) met for the first time in October, preparing their recommendations about funding requests by 12 organizations (11 Wikimedia chapters and the Foundation) from a pool of more than $10 million of Wikimedia donations. In this new model, the funding requests have to be submitted in public, enabling a community review period that lasted until October 22.

The staff which supports the FDC scored each request according to a criteria list:

The Signpost (the English Wikipedia’s weekly community newspaper) has published an overview of these scores and of the requested sums.

The Board of Trustees will announce its decision about the FDC’s recommendations in December.

Wikipedia Zero, the program offering mobile Internet users access to Wikipedia without data charges, added Saudi Telecom Company (STC) to the list of partners. With STC’s 25 million subscribers in Saudi Arabia, Bahrain and Kuwait, altogether 230 million mobile users in 31 countries have now access to the program, half a year after its worldwide start. A preliminary evaluation of its effect on readership is promising: Wikipedia pageviews from Orange Niger customers grew by 77% and those from Orange Kenya customers grew by 88% in a four-month period including the launch in these countries. In Malaysia, unique visitors to Wikipedia from local operator Digi jumped by 42% after it joined Wikipedia Zero.

82,582 (+4.08% compared with August / +2.98% compared with the previous year)
(Database data, all Wikimedia Foundation projects. Note: We recently refined this metric to take into account Wikimedia Commons and activity across several projects.)

(Financial information is only available for September 2012 at the time of this report.)

All financial information presented is for the Month-To-Date and Year-To-Date September 30, 2012.

Sorry, your browser either has JavaScript disabled or does not have any supported player.
You can download the clip or download a player to play the clip in your browser.

Video of the monthly Wikimedia Foundation metrics and activities meeting covering the month of October (November 1, 2012)

Sorry, your browser either has JavaScript disabled or does not have any supported player.
You can download the clip or download a player to play the clip in your browser.

The power of collaboration: Two robots have learned that they can move larger things if they work together. (Video from a research paper titled “Evolution of Adaptive Behaviour in Robots by Means of Darwinian Selection”, imported to Commons by the Open Access Importer Bot)

The Open Access Media Importer Bot was approved on Wikimedia Commons at the end of October. It searches publication databases (such as PubMed Central) for audio and video files that accompany scholarly papers as supplementary material, and uploads them to Wikimedia Commons if they are available under suitable free licenses. It has already imported more than 9000 files.

An international conference titled “Shaping Access! – More responsibility for cultural heritage” took place in Berlin on October 23 and 24, co-organized by the German Wikimedia chapter with five other organizations. More than 200 representatives of cultural institutions (GLAMs) discussed ways of making cultural heritage more accessible, among them Wikipedia and Wiki Loves Monuments.

In mid-October, the fourth annual Ada Lovelace Day was celebrated to honor the contributions of women in science, technology, engineering and mathematics, remembering computer pioneer Ada Lovelace (1815–1852). Wikimedians participated with several events, including editathons at the British Royal Society and at Harvard University that focused on improving Wikipedia coverage of women in science, and a party hosted by the Wikimedia Foundation.

Wikidata reached a milestone on October 30 when its wiki at wikidata.org went live, as the first new Wikimedia Foundation project since 2006. Wikidata will be a central repository of structured data for Wikimedia projects. The software is being developed by the German chapter. The project consists of three phases. In the first phase, which has now begun, the interlanguage links that are connecting articles about the same topic in different language projects are being collected on Wikidata. The Hungarian Wikipedia will be the first project to make use of these centrally stored interwiki links.