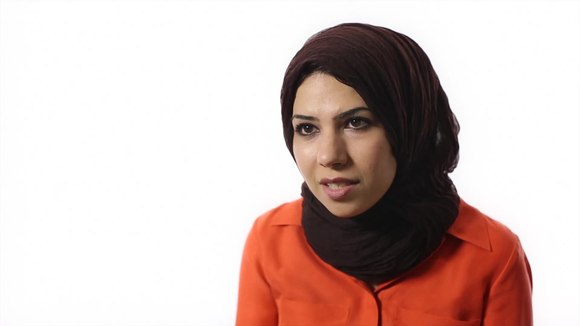 Ravan Jaafar Altaie and the impact she has had on the world through editing Wikipedia. This video is part of a series for this year’s Wikimedia Foundation fundraiser. You can also view this video on YouTube.

Like so many other Wikipedians, Ravan Jaafar Altaie was inspired to edit Wikipedia as a way to learn more about the world around her. As a native of Iraq, she also hoped to make a difference for Arabic speakers by expanding content on the Arabic Wikipedia.
After frequenting the online encyclopedia as a reader for several years, Altaie was encouraged to try her hand at editing in 2008, when she heard about the “Add to humanity, add to Wikipedia” initiative started in Egypt. “That was the first time that I was aware that you can really edit Wikipedia instead of just consuming the information and using it for yourself,” said Altaie. “So once I heard about this, five minutes later I registered in Wikipedia and I started editing it.”
When describing one of her first editing experiences, Altaie was impressed by the collaborative spirit of the encyclopedia and by its immense reach. “I started many articles. One of them, I think it was about a lady, called Mariam Nour. So, and this was my first article. So I forget about it. Maybe two or three years later, I was having some time in Wikipedia, I passed by this article. I was shocked. It was grown!” she exclaimed. She said more than 100,000 people had read the article, which astonished her.
“You feel like you affected and influence more than 100,000 people. I think this is a very amazing thing.”
According to Altaie, editing an article allows a user to take time to research a specific topic or area of interest. She explained that by providing information to others by editing an article, an editor is discovering and learning new information at the same time. This perspective has motivated her to research and write about such diverse topics as the moons of Jupiter, the paintings of Leonardo da Vinci and the Arab Spring.
“There is always something new to write about,” explained Altaie. “If I want to know some information about some subject  — I don’t know anything about it — I start an article because I will search for the sources.”
Altaie finds motivation in the hope that knowledge can be spread in the Arab world through Wikipedia and she has attempted to help bridge the educational gap between the developed and developing world. “I think Wikipedia gave me this chance to really make a huge difference in the world,” she said. “I don’t know if you know this — information in the Arab world has been censored for many decades. So it’s really great to have free knowledge and free information given for people with reliable sources, with a great group of people reviewing this information.”
As more and more users turn to Arabic Wikipedia, editors like Altaie aim to increase the content, either by translating existing pages from other languages, or by creating original articles. The importance of such a source was illustrated by the widespread reliance on Wikipedia for reliable information during the Arab Spring when Altaie and her fellow Arabic-speaking Wikipedians provided day-to-day coverage of the events.
According to her, the significance of an online tool like Wikipedia is limitless. She said that by providing a means to make a change for the better, Wikipedia can serve as an investment in the future collective knowledge of the world.
“This is the best investment you are doing because you are affecting yourself, your children, the coming generation to have a free source, a free knowledge, an amazing encyclopedia, affecting all the fields of their life,” she said. “It’s like an investment for your future and for your children’s future.”
Profile by Jawad Qadir, Communications Intern
Interview by Victor Grigas, Visual Storyteller