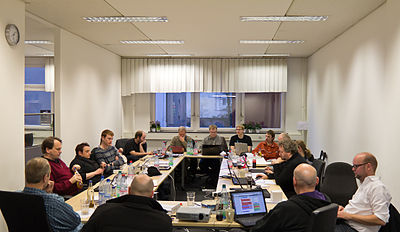 Wikipedia Support Team meeting in the office of Wikimedia Germany

Over the first weekend of December, the German-language support team met in Berlin for their second workshop of 2012. Commonly referred to as the “volunteer response team” (or formerly “OTRS team” after the software it uses, the ”Open-source Ticket Request System”), the team handles a wide range of emails from Wikimedia users and the public, including complaints about Wikipedia articles, inquiries about the Wikimedia projects in general, and statements of permission for images uploaded to Wikimedia Commons. Originally established in 2008, the workshops have since become an integral part of our efforts to improve coordination and enhance understanding of legal as well as technical aspects of our work.

This time, the workshop was hosted by Wikimedia Deutschland, the German chapter. Our thanks go specifically to Christoph Jackel of their Team Communitys, who organized all we needed, be it accommodation for participants or the set-up of the venue at the chapter′s office. We are also, as always, very grateful to Wikimedia Deutschland for reimbursement of transportation and accommodation costs.

The weekend started out with a dinner on Friday evening, attended by about 15 team members. Even though the team is relatively small in size and collaborates smoothly online most of time, it is always a great pleasure to meet in real life, especially for new team members.

On Saturday, the workshop began with a short presentation by Jan Engelmann, head of the Politics & Society department of Wikimedia Deutschland, about a proposed European Union data privacy law designed to implement a “right to be forgotten” for EU citizens, and the potential implications of such legislation for the Wikimedia movement. Following this, Dr. Ansgar Koreng of JBB Rechtsanwälte, a Berlin-based law firm advising the German chapter, talked about issues related to personality rights and copyright that regularly come up on Wikipedia and as part of our work. As the de facto primary point of contact for complaints related to personality rights, we have always found it important to be able to properly react to such issues and support people affected by violations against Wikipedia′s policy on biographies of living persons. As a side effect, this also helps to avoid legal disputes before they have a chance to arise. Dr. Koreng stood ready for numerous questions from our side.

Throughout the entire event, we documented our discussions in real time using a private Etherpad. This also enabled those team members to participate who could not spare the time to come to Berlin.

Later on Saturday, Alice Wiegand, Board of Trustees member since 2012 and a long-time member of our team, talked about developments within the Wikimedia movement and their link to our work in the support team. On the initiative of one team member who gave a short introductory talk, we proceeded to discuss the potential of using flowcharts to document processes commonly employed when handling specific types of requests. Martin Edenhofer, the inventor of the OTRS software, who was scheduled to give a talk about tweaks of the system and recommendations on its use, unfortunately could not attend for personal reasons, but we very much hope to be able to welcome him at a future workshop.

Sunday was mostly devoted to internal processes. We first spent about two hours on a number of questions we had collected in the months preceding the workshop. After lunch, we went on to fill in the details of a member’s proposal to rename and modify response templates we use for very common or difficult-to-respond-to requests. Both topics of the day were aimed particularly at improving the quality of our responses and the efficiency of our handling thereof. Many of the issues that came up had previously been attempted to be addressed online but could not be resolved—showing yet again how productive it can be to discuss face-to-face. The event ended at 2 p.m. on Sunday, leaving time for participants to wade through a snow-covered Berlin and make their way home.