Iara Camargo had one term of teaching experience when a professor in her Ph.D. program at the University of São Paulo forwarded her an open call from the Wikipedia Education Program in Brazil. The program was looking for faculty members who were interested in assigning students to write Wikipedia articles as part of their coursework. Iara, excited by the prospect, signed up.

“I got very excited about the idea of writing articles with my students on Wikipedia,” she says. “I think most academics have a little prejudice about Wikipedia, saying that some information could be not quite real. But I’ve always used Wikipedia as a starting point to research a subject. The idea is not to use it as a reference, only to have some idea about the subject. Then, when I started to look at it more critically, I found many good articles in my research field… and of course some poor ones.”
Iara asked her students in her Editorial Design course at Faculdades Integradas Rio Branco to improve those poor articles. Her students researched and wrote articles ranging from famous designers like Bea Feitler to concepts like legibility to publishers like Penguin Books. Iara even started an article herself, on book design.
“I like incorporating Wikipedia in my class for these reasons,” she says. “First, to stimulate the students to read and write more. Second, I believe that is good because they are actually publishing something, it is not a paper that they are writing just to me to have an evaluation. Third, they have to be conscious and judicious to write well, because a lot of people might use it in the future.” 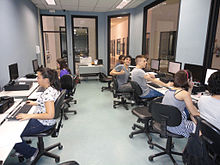 Students in Iara’s classroom work on their Wikipedia assignments.

In particular, Iara says, her students get more from the Wikipedia assignment than they would from many traditional assignments in the design field. Since design is mostly a visual medium, students do not have the chance to develop as much researching and writing skills, but those are critical skills for their careers. Iara believes the Wikipedia assignment helps students learn these skills while teaching them the fundamentals of the discipline.
“It is great in terms of writing, you have to be impartial and write objectively, which is in some ways scientific writing because you cannot add subjective writing to Wikipedia,” she says. “And I think it is great because they really have to find reliable sources instead of using the argument ‘I’ve heard it is like that’ or ‘I thought it was like that’.”

A Campus Ambassador helps one of Iara’s students.

Iara’s department head Professor Paulo Durão enthusiastically supported her and her students as they worked on the Wikipedia assignments. In fact, the institution’s academic director Professor Alexandre Uehara liked the idea so much that Iara and her Campus Ambassadors, Cauê Henrique Rodrigues, Denise Akemi Matsuda, and Maira Rodrigues, were featured in a video shown in the school cafeteria for one month. Iara and her students also had help from two Portuguese Wikipedians serving as Online Ambassadors, Vitor Mazuco and Gabryelsl. The wikicode was initially scary for Iara, but with the help of the Ambassadors, she learned how to edit Wikipedia and is even excited about using her wikicode skills.
“My favorite part was the challenge of working with it!” Iara says. “It’s a wonderful tool and Wikipedia is not only a website, it is a very important cultural phenomenon. We are in a different time and maybe learning and studying nowadays has to be integrated with this new Internet life we are living.”
LiAnna Davis
Wikipedia Education Program Communications Manager