The other day, the Wikipedia Signpost – the English Wikipedia’s community-written newsletter – provided an update on Wikiproject Chess, which was founded in 2003 and counts over 100 Wikipedians as members. 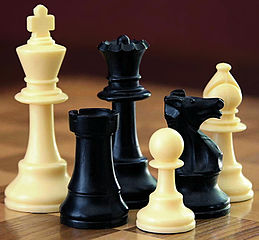 WikiProject Chess editors have written extensively on a cornucopia of chess topics like strategies, endgames and notable players, including four Featured Articles (FAs) and 15 Good Articles. The project’s main article, “chess,” is actually one Wikipedia’s oldest FAs, achieving this quality rating back in 2002 when the FA process was still called “Refreshing Brilliant Prose.” Over the following decade, the article has had to be reviewed a few times to meet the rising FA standards.
The Signpost interviewed one of the project’s members, Sjakkalle, who is no slouch of a chess player himself, as he is an active tournament player and has a FIDE rating of 1944.
“I started working on chess articles shortly after I joined Wikipedia in 2004-2005,” explained Sjakkalle, who has created nearly 40 chess articles. “At the time, there were a number of good chess-related articles, but many were underdeveloped and many significant topics lacked articles altogether.”
On his user page, Sjakkalle self-deprecatingly recalls losing a game in his first international chess tournament last year, starting his international career by committing a blunder of exactly the kind that he himself had warned Wikipedia readers about two years earlier by making this edit to the article blunder (chess). “I should have known better,” he said. “Apparently, I didn’t.”
Even though there is no shortage of literature on chess—Sjakkalle says it’s possibly the most studied game ever—WikiProject Chess does have its challenges. According to Sjakkalle, they are missing a number of articles on the games’ grandmasters—particularly the Russian ones—and while there are many articles on openings and endgames, coverage of the middlegame tends to be underdeveloped. He also says that although many articles are well-illustrated with diagrams of chess positions, finding missing images of some of the game’s legendary players can be difficult.
Although they have already done a ton of great work, Sjakkalle is quick to put the word out that WikiProject Chess is always looking for new contributing members. “Anyone who wants to contribute will be a most welcome addition to the project!”
For more info on WikiProject Chess, read the full interview on the Signpost.
Darrin Fox, Communications Intern