Logo of the IdeaLab

The Foundation’s Individual Engagement Grants program launched on January 15. While most WMF grants have so far gone to organizations like chapters, the new program will finance initiatives by individual Wikimedians or small teams to improve Wikimedia projects. The first application period lasts until February 15. During the first two weeks, 31 ideas, drafts, and proposals were submitted. An “IdeaLab” has been set up where draft proposals can be discussed, and applicants can get help to turn their ideas into complete proposals. 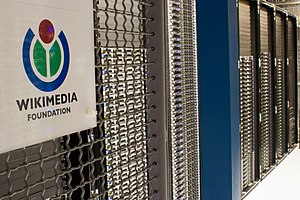 On January 22, Wikipedia and all other Wikimedia sites were migrated to the Foundation’s new primary data center in Ashburn, Virginia (US). The prior data center in Tampa, Florida had been the main hosting site since 2004; it will remain on standby to take over in case the new data center experiences an outage. The switch worked nearly without any problems. The Operations Team attributes this success to the careful preparation since 2011. This involved reviewing, improving and documenting the configuration of the servers (currently about 885) in a way that has already improved stability in 2012, and will make it possible to set up new data centers much faster.

VimpelCom, the sixth largest mobile network operator in the world, joined the Wikipedia Zero program in January, raising the number of mobile users who are eligible to access Wikipedia without data fees by 100 million, to 330 million worldwide. Among the countries serves by VimpelCom are Russia, Ukraine, Armenia and other countries of the former USSR.

On January 15, the 12th anniversary of Wikipedia, Wikivoyage was officially launched as the newest project of the Wikimedia Foundation. The free travel guide that anyone can edit is already available in nine languages – Dutch, English, French, German, Italian, Russian, Portuguese, Spanish and Swedish – with more being added. There are more than 50,000 articles, which are edited and improved by a core group of approximately 200 volunteer editors.

78,536 (-1.04% compared with November / +0.09% compared with the previous year)
(Database data, all Wikimedia Foundation projects. Note: We recently refined this metric to take into account Wikimedia Commons and activity across several projects.)

(Financial information is only available for December 2012 at the time of this report.)

All financial information presented is for the Month-To-Date and Year-To-Date December 31, 2012.

Video of the monthly Wikimedia Foundation metrics and activities meeting covering the month of January (February 7, 2013) 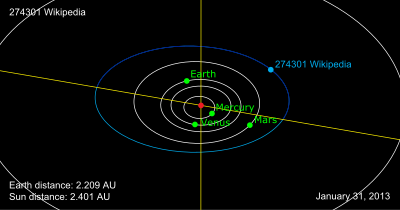 A committee of astronomers has decided to give a recently discovered asteroid the name 274301 Wikipedia. The name had been proposed by Andriy Makukha, a board member of Wikimedia Ukraine. Wikipedia orbits the sun every 3.68 years, and its diameter is estimated to be about 1–2 kilometers (around 1 mile). 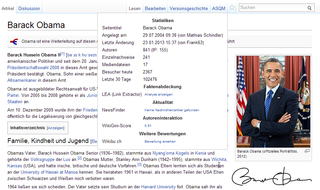 RENDER (REflecting kNowledge DivERsity) is a three-year research project begun in 2010 and funded by the European Union. Wikimedia Germany is one of the project partners. At the end of January, RENDER released two tools to support the work of Wikipedia editors: The Task List Generator (TLG) lists articles in a given category that are marked with a cleanup template or have other flaws, such as lacking images. The Article Statistics and Quality Monitor (ASQM) “offers a brief overview about the quality and the current status of any Wikipedia article”. It integrates data such as the number of references in the article, its pageviews, and a comparison of its wikilinks with other language versions of the article, possibly indicating information that it missing from one language version of Wikipedia but is present in another. 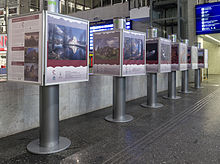 The winning pictures from the Wiki Loves Monuments 2012 photo contest were presented in a three-week exhibition at Warsaw Central, Poland’s largest railway station. The exhibition was organized by Wikimedia Poland, in cooperation with an initiative of Polish State Railways that presents open cultural events at selected train stations in Poland.

Review of management and conflict of interest issues at Wikimedia UK

In January, work wrapped up on a report by Compass Partnership, a group of UK-based consultants in non-profit management, about the management structure of the UK Wikimedia chapter and its handling of conflict of interest issues. The report was commissioned jointly by the Foundation and Wikimedia UK in October 2012 following community discussions about potential conflicts of interest arising from a series of outreach projects, including Gibraltarpedia and Monmouthpedia. The report makes various recommendations on how to improve policies and procedures.