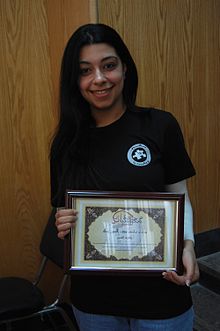 “Wikipedia’s world is a beautiful world,” says Doaa Seif of Egypt. “You can see all cultures of the world through the window of a language that you know.”
Doaa hadn’t always known much about the Wikipedia world; a year ago, she was introduced to Wikipedia when the Wikipedia Education Program Cairo Pilot started at her university, Ain Shams University in Cairo. Doaa, a Cairo native, was excited about the prospect of becoming a Campus Ambassador for the program, and quickly signed up. Her classes did extremely well, and Doaa was hooked, so when she became a Teaching Assistant for the Faculty of Al-Alsun (languages) at Ain Shams, she immediately joined the program so her students in two separate courses, Hebrew and Research Methods, could also contribute to the Arabic Wikipedia.
“I know very well that my students have strong skills in language, and I want to invest these skills to enrich the Arabic content of the encyclopaedia in different languages — Arabic, Hebrew, Spanish, Italian, Chinese, Korean, Turkish,” Doaa says. “In addition, I believe that we, as Arabs, have to enrich the Arabic content by ourselves.”
Editing the Arabic Wikipedia has become a daily habit for Doaa, and she envisions the additions she makes to the Arabic Wikipedia are improving knowledge of people in remote locations.
“Many of us are looking for information in a specific field and may not find anything about it on the Arabic Wikipedia,” she explains. “If I and also my students can add other useful information, why not do it? We know how to write about the culture of this language, or about its people or culture or politics, economy, tourism and senior political figures and literary state that speaks this language.”

Doaa Seif presents at a conference she organized on how to edit Wikipedia at Ain Shams University in Cairo.

In this way, Doaa believes, she and her students are helping improve information available not only about Arab countries, but also countries and people worldwide. In particular, Doaa specialized in studying Israeli society and the Hebrew language. She focused her scholarly work on Israeli theatre, and she wants to add content to the Arabic Wikipedia about these topics.
Doaa doesn’t just work within the classroom. In 2012, she organized a conference on how to edit Wikipedia, attended by more than 200 people at Ain Shams University. (See photos from the event here.) She wants to organize another international conference in Egypt, this time with thousands of attendees who are interested in spreading knowledge through contributing to Wikipedia.
“I dream of the day when the Arabic Wikipedia will be first in the number of articles and in the accuracy of the content,” Doaa says. “I also dream that Arabs will transcend barrier of writing in other languages to express ourselves and our culture in the other language Wikipedias.”
LiAnna Davis, Wikipedia Education Program Communications Manager