The Argostoli Evening High School in Kefalonia, Greece has been active on Wikimedia projects since 2007. It is one of the few schools in Greece to have its own article on Greek Wikipedia (after “surviving” a heated deletion debate). For the school year 2012-13, we decided to embark on two ambitious journeys: First Grade of Upper Secondary is studying the edible species of wild flora on the island, while Second Grade is investigating a local legend that says there are 365 villages on the island, one for each day of the year. What better place to publish the material we are gathering than a Wikimedia Commons gallery!

The Wild Flora of Kefalonia: Survival and Relish 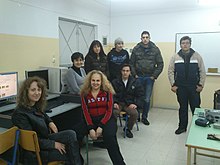 First Grade of Upper Secondary in the computer lab, working on the wild flora project.

Kefalonia is an island with bountiful natural assets. The wild flora of the island is mostly typical to regions of the Mediterranean basin, however with certain species that are particular to the Kefalonian flora (e.g. the black fir abies cephalonica). It is only logical that the locals turned to the flora in times of difficulty for their mere sustenance: older senior citizens in their late seventies, eighties and nineties have tales to tell of their survival “off the fruit of the land” during World War II.

But that’s not all: many of the native species are gastronomic delicacies in their own right! Greek chefs can often be found rummaging through open-market stalls, on the lookout for freshly cut pot-herbs and other wild flora ingredients for their recipes. In the larger cities, they will often pay dearly for such treats… while here in Kefalonia, they’re growing all around us. We decided to document as many edible species as possible, and started a gallery on Commons with the designation: photo 1 is a view of the tree, shrub or plant – photo 2 is a view of the edible part(s) – photo 3 is the species processed as food, with emphasis on preservation methods where applicable (pickled – preserves – dried etc.). For each species we will find the botanical name to use as a title for the photos, while also mentioning English and Greek common names in the descriptions (as well as local names, where applicable). Have a look at our ongoing work here.

365 Villages in Kefalonia: Myth or Reality?

Mihalis (right) shows the ropes in uploading, while his classmate Makis (left) gives it a try.

Ask any native in Kefalonia “How many villages are there on your island?” and he/she will proudly respond “365! One for each day of the year”. Sounds interesting… but no-one has ever actually written a book or essay, or so much as made a list to prove it. The idea had been lingering in my mind for a couple of years, and this year I introduced it to my pupils. They were excited, so we embarked on the project.
Less than a month had passed when we identified major obstacles: Greece has been subject to numerous administrative reforms over the course of modern history, the latest being “Kallikratis,” by which many municipalities were “fused” into larger ones. This is what happened on our island: the long-standing seven municipalities — shaped in the previous “Kapodistrias” reform, but closely tied to the history of the island dating back to Ancient times — were pooled into one, the Municipality of Kefalonia. So, we figured, imagine how many villages were “usurped” during each of the previous reforms. How could we find a valid scientific method to document these currently non-existent villages, as each of them carried its own history, culture and ancestry? The answer was to visit the General State Archives’ local offices. The director was kind enough to open the premises in the evening (our school is for working pupils and adults aged 14 upwards) and talk to us about the research that she could help us carry out there. She also told us that we would have to look up the Government Gazette issues pertaining to each of the past reforms to find the now-obsolete villages.
OK, so now we have a method. Why not get started with the “easy stuff”, and leave the research for later? Pupils were broken down into groups, and each was handed a map and assigned a former municipality to cover with photos under the general designation: view OF village – view FROM village – landmark (church, ancient ruins or other point of interest). They grabbed their cameras and brought back their material, which we are continually uploading to our gallery in Commons. 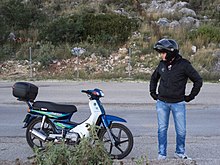 Kostas on field work for the 365 villages project.

Where does the local community step in?

Kefalonia is quite a large island: it’s the sixth largest in Greece. To reach either the northernmost or southernmost tip from the capital (Argostoli), you need to drive around 50km. In times of financial crisis, this is not affordable. One group of pupils set out in the early afternoon (17-year-old Kostas and 26-year-old Giorgos both work on weekends) to a distant location in late autumn, only to find that they could not cover the entire area, as the sun was setting and they couldn’t take any more pictures. It’s not easy for them to repeat the process. So where do we get the copyright-free, original material we need for our galleries? The answer: get the local community involved.
Kefalonians are proud of their rich history and culture, and eager to hear about projects illuminating aspects of their heritage: for example, there is ongoing excavation work with interesting finds that may prove that Homer’s Ithaca was not on the neighbouring island bearing the same name, but in southern Kefalonia. I believe that they will be intrigued to participate in proving the villages’ legend, and willing to share their photos; others may want to share knowledge on the edible wild flora (it’s amazing how many plants around us are edible, and we don’t even know it!)
The event is planned for mid-March. Apart from presenting the work we have already carried out, we intend to include a mini-lecture on Creative Commons licenses (so they know how the material they contribute will be shared). I will suggest that the material either be sent to me by e-mail, or brought to the school in person, or… why not engage the locals themselves in editing? That would mean an extra seminar on the basics of Wikimedia editing, which I would be happy to organise, if there are enough interested participants. 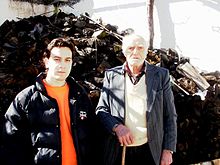 Panagiotis interviewed WWII survivor A. Bozas about eating wild plants to survive. We hope to gather more stories and knowledge at the planned event.