Every graduate student gets assigned a lot of reading, but not every graduate student gets assigned to read something they’ve written. That happened to Jacqueline McCrory in fall 2012, thanks to the Wikipedia Education Program.
As a master’s student in Environmental Management at the University of San Francisco and an employee at environmental consulting firm Analytical Environmental Services (AES), Jacqueline knew a lot about habitat conservation plans (HCPs) — but there wasn’t anything on the topic on Wikipedia. So when she enrolled in Professor Aaron Frank’s Environmental Law class in spring 2012 and discovered that Professor Frank assigned writing a Wikipedia article on a course-related topic, Jacqueline gravitated toward creating one. 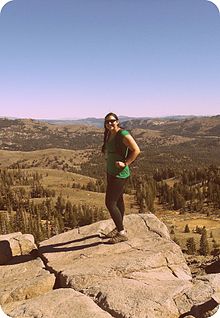 “I chose this topic because the existing article had very limited information and the concept is important for conservationists as well as environmental planners,” she explains. “The legal documents pertaining to HCPs can be extensive and somewhat convoluted to read through, so I wanted to create a source that would clearly provide the need-to-know information to interested readers.”
Jacqueline was excited by the prospect of writing something that would have a global audience, and further her study of the conservation of special status species. She had support from two veterans of Wikipedia assignments: Professor Frank has participated in the Wikipedia Education Program since its pilot in spring 2011, as has Campus Ambassador Derrick Coetzee. With their assistance, Jacqueline and a fellow classmate created the article on Habitat Conservation Plans.
Other professors at the University of San Francisco noticed that the article on such an important topic to their field of study had been created, although they didn’t realize it had been written by a student in their program. One such professor assigned the article as required reading for students in his fall 2012 Natural Resources Management course. Little did he know, the author of the article was taking his class that term.
“When I informed the instructor that I had actually written the article, he acknowledged the depth and quality of the article and invited me to prepare a guest lecture on the subject material for my own class,” she says.
Jacqueline didn’t just receive kudos for her Wikipedia article at her university: her supervisors at AES recognized her expertise in the subject, and gave her related assignments. She’s grateful for the opportunity that Professor Frank’s class gave her, as she says she would never have edited Wikipedia without that nudge. And she recognizes how beneficial Wikipedia assignments are to students.
“Most papers that we write for undergraduate and graduate level courses end up being read by the professor grading the assignment and remain in electronic folders to be deleted as trash at some point in the future; however, when published as Wikipedia articles, these academic papers can be viewed and used as resources and references for countless other people and may continue to serve a purpose,” Jacqueline says.
LiAnna Davis, Wikipedia Education Program Communications Manager